During this year's Pride festivities in the Netherlands, charging station manufacturer EVBox, utility company NUON and the City of Amsterdam are joining forces with special "Power to the Heroes" charging stations to help make the world a more sustainable and inclusive place for all. The first rainbow charging station was revealed this morning near Amsterdam's historic Homomonument.

Power to the Heroes

This year's theme for Pride Amsterdam is 'Heroes'. There are many types of heroes: from human right activists, or local volunteers to drivers choosing to buy an EV for environmental reasons. More and more people are showing their 'heroic side', by making sustainable choices such as investing in solar panels or buying an EV. This comes down to a matter of respect and pride; showing respect for our planet and its inhabitants, and pride in the contribution every person can make.

This Pride, EVBox, Nuon and the City of Amsterdam want to help some of these heroes with their mission. From July 28th until August 5th all revenues of the 256 public charging points in the centre of Amsterdam (see image below) will be donated to the COC (the Dutch LGBTQ association). 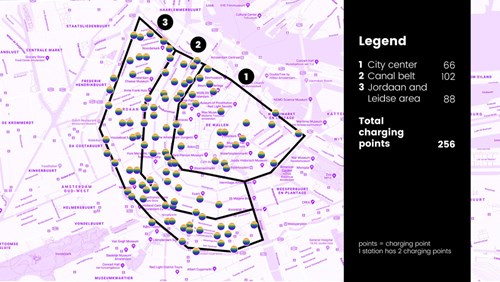