We go back to the early 1920s en -30s in Oklahoma City. There was no regulated parking anywhere yet. People would just park their cars in the streets and left them there until they needed them again. In shopping areas most of the parking spaces were occupied by employees who worked downtown, leaving no room for potential customers. Traffic congestion problems were common in big cities. It was hurting business, and soon people started to think about a way to regulate the parking time.

Because merchants were complaining about the low traffic in the downtown area, they decided to ask Carl Magee for help. Magee immediately thought about a machine which we now know as the parking meter: A machine that sets certain amounts of time for parking. He organized a design contest at the University of Oklahoma to design this newfound parking meter. This was a challenge since the machine had to be operative in all kinds of weather, be vandalism-proof and cost-efficient. There was a price for the engineering student who could design this machine, but unfortunately none of the students’ entries were approved. 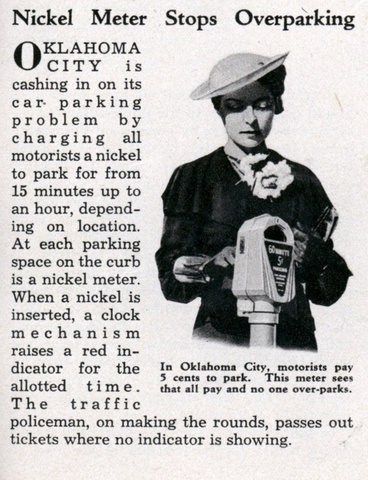 The first working parking meter was designed by Holger George Thuessen and Gerald A. Hale. Hale and Thuessen started working on the parking meter in 1933 because of the assigned project by Carl Magee. They weren’t students anymore, but since the contest didn’t work out these two men were appointed. Thuessen was a professor at Oklahoma State and Hale an engineering graduate. The parking meter they designed was called The Black Maria.

Most people didn’t care for the idea of paying for parking spaces that were usually free. But soon people in Oklahoma City noticed that the traffic flow improved and the congestions were solved. At first, the parking meter was installed at only one side of a downtown street. They say that businesses already noticed a positive effect within a few days and that three days after the installation of the meters on one side of the street, bussiness owners from the other side of the street demanded that they also got parking meters installed in front of their stores.

The installation of the parking meters didn’t only solve the traffic problems but also created
revenue because of the new costs for vehicle owners who wanted to park their car downtown.