Great opportunities in the smallest of spaces. Where parked cars are stacked, valuable space is saved.

WÖHR had a vision of simple and space-saving parking as early as 1959. Today - sixty years later - the need to provide intelligent solutions is more important than ever before. The increasing densification of the city centers and rapidly growing traffic also bring with it a dramatic lack of sufficient parking space. WÖHR has specialized in safely parking many vehicles in a confined space. After all, the highly traditional family business, established as early as 1902, has the largest own range of products for parking solutions worldwide, from classic Doubleparkers with two vehicles parked on top of each other to impressive large-scale projects with 1000 and more parking spaces in fully automated parking systems.

WÖHR’s core competences lie within customized and project-based solutions: the more compressed you build above or under the ground, the more land can be available for green areas, which in turn contributes to preserve the green lung of every breathless and overheated town. It is incidentally not important whether the project involves a planned new construction or an existing building, where a parking system is to be integrated. A good example of a retrospectively installed, compressed parking area is a project in The Hague. This is where a fully automated parking system of Type Parksafe 583 was installed in an area of approx. 135 m² within bank premises dating back to the 19th century. This is how, from this union between historical building structure and high-tech parking emerged 52 new parking spaces for residents and office workers of the building at the Kneuterdijk in the flourishing city center of The Hague.

Also regarding bicycle traffic, which is promoted by the public authority and equally increasing, WÖHR has thought of an intelligent solution for the sea of bicycles, which relentlessly overflows past the station forecourts in most cities and which is anything but conducive to a well-kept city image. On an area as small as 38 m², WÖHR stows away 122 bicycles in its Bikesafe tower version, which fits in any environment, thanks to a facade that can be individually designed.

Upon customer request, new as well as existing projects with WÖHR parking systems are equipped with the innovative Universal Post for e-charging on-site. Also in terms of a modern operating concept, the team of developers of the Swabian company has come up with a solution to be proud of: On request, the parking system type Combilift can be conveniently controlled by users via their smartphone with the WÖHR Smart Parking App. Digitisation does not even stop when it comes to parking. 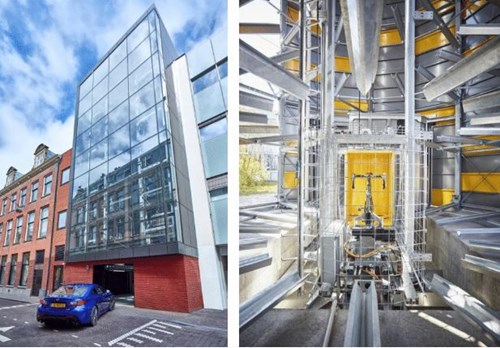 From bank safe to Parksafe: 52 vehicles are stored on 9 levels in the renovated old building. The bike version Bikesafe offers space for 122 bicycles.

WÖHR is one of the leading manufacturers of car parking systems. For almost 60 years now, since the number of cars on the roads began to increase, Wöhr has been designing and installing parking systems. And because they specialise in just parking systems, Wöhr today is the company with the most extensive product range worldwide. With over 500.000 parking places installed, the reliability and safety of Wöhr systems speak for itself.