APT Skidata has recently completed the installation of a pay on foot parking system at Whitehall Road, a surface car park in the centre of Leeds that has acted as a trial for a roll out of new parking solutions at nine other sites in Manchester and Leeds.

Owners of the site, Town Centre Car Parks (TCCP) own and operate eleven car parks with over 5,000 spaces in Leeds and Manchester, which are currently a combination of pay on entry, pay on foot and ANPR enforced. TCCP is looking to implement pay on foot parking systems at these car parks and has now chosen APT Skidata as its partner to supply the systems.

Whitehall Road car park, which is primarily used for public parking, was previously 'pay on entry' with some spaces allocated to contract parkers. Visitors would pay a fixed 'day rate' tariff to an operator in a hut on the entry lane and the lack of flexibility led TCCP to seek another solution, as Ben Ziff, Managing Director at TCCP explains:

“Customer feedback told us that we needed to make the charges fairer as some felt they were paying too much for short stays, and others were leaving their cars overnight and not paying enough,” he says.

The new solution includes pay on foot controlled entry and exit lanes linked with ANPR, two of APT Skidata’s EasyCash pay stations which accept cash and card payments, and the main control located on site with the ability to have off site control via APT’s remote desktop (RDT) software.

Following the successful installation at Whitehall Road, APT Skidata has since completed the replacement of the parking system for the Merrion Centre Multi Storey car park, part of a large shopping centre in the heart of Leeds opposite the newly opened First Direct Arena. 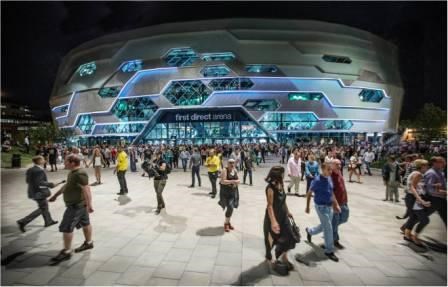 The car park required a new Pay on Foot system in place prior to the grand opening of the Arena and as such APT Skidata worked against extremely tight deadlines. The new system includes a new main control facility, four Power.Cash and fou Credit.Cash pay stations, one entry lane, two exit lanes and a tidal lane, with all equipment custom coloured in TCCP branding.

Phase two of the works is expected to take place in 2014 and will include high-speed gates, Electric Vehicle Charging points and bay detection.

Ben Ziff, Managing Director at TCCP says he extremely impressed with APT’s professionalism and ability to deliver despite difficult deadlines: “Part of the reason we were able to complete what seemed like an impossible task was the close working relationship we enjoy with everyone at APT,” he says.

“The APT engineers have to be credited with the speed of the installation.Their expertise meant that the system was fully operational in time for the opening concert. We look forward to working with APT Skidata more closely in the future.”