The first Veri-Park barrierless parking system from the APT Controls Group has been successfully installed at the Peel Centre in Bracknell to help Land Securities address the issue of congestion and improve the customer parking experience for shoppers.

The Peel Centre in Bracknell town centre is the dominant retail park in the area, and retailers include a 40,000 sq ft Morrisons and an equally large Tesco Home Plus, alongside 10 other retailers, and entertainment attractions including Hollywood Bowl, Pointbingo and an Odeon Cinema.

It is a popular retail and entertainment destination, attracting 1.5 million cars a year, and at peak times congestion in the surrounding area was causing a problem – something Land Securities was keen to resolve.

“The Park came under new planning restrictions which meant that we could not allow a build up of cars,” says Paul Plumbley, Portfolio Car Par Manager for Land Securities, “so we began investigating alternative solutions to the traditional barrier system we had in place.

“The system has served us well but the congestion at peak times was a symptom of The Peel Centre’s success and one which needed to be addressed if we were to improve the customer experience and satisfy the council. We knew that removing barriers at entry makes it easier – and quicker – for cars to enter,” explains Paul, “but we did not want a traditional ANPR system, which is based on a penalty notice economy and only serves to penalise visitors who over-stay. It is imperative that the car park serves the businesses on site and does not deter shoppers from returning and this was the appeal of the Veri-park system.”

Veri-Park offers an alternative approach to parking management and control at the Peel Centre. The car park encourages visitors by offering two hours free parking as standard, and three hours for those visiting one of the leisure or entertainment destinations on site. Paul estimates that 85-90% of visitors leave within the free parking period but they would still be delayed at the barriers and still have to get a ticket.

“With Veri-park, no active interaction with the parking system is required unless people stay longer,” says Paul, “and if they do stay longer they can pay for what they use rather than being fined for overstaying their welcome.” 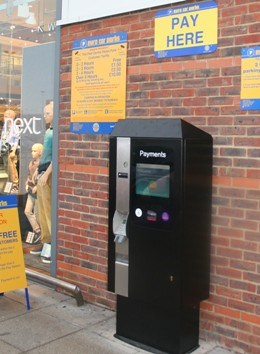 Andrew Hiddleston from Veri-Park says that The Peel Centre is the ideal site for Veri-park’s technology: “Thankfully ANPR technology and the thinking behind it has advanced and we know, for example, that most car park users will invariably pay if the ability to do so is there. So allowing people to make top-up payments if they go beyond the free parking limit rather than incurring a hefty fine is much more customer friendly.”

At the heart of the Veri-Park system is the payment kiosk where drivers can validate their stay using their registration plate number and pay for additional time.

Paul acknowledges that there was a hesitation in relying on a system that requires drivers to use their registration plate: “We use ANPR technology on other sites to help with lost tickets and our historic data tells us that a considerable number of people do not actually know their number plate. So it could have been a risk for us to introduce a system that relied on using the license plate as the ‘ticket’. This might have been a bigger consideration if we did not already know that the vast majority would not have to use the kiosks at all.”

To help customers that do, there are three kiosks within the car park which have large, robust touch screen displays. They are sensitive enough to detect the lightest touch and provide users with a clear and easy set of payment instructions and options.

“There is a significant age range of people using the park and therefore the machines,” says Paul, “but the interface is straight forward and the process is not too technical. We have seen people cope well and pick it up very quickly.”

For those who forget to pay for additional time when they go over the free hours, there are multiple options to pay – which do not involve a penalty fine.

In fact Paul prefers to avoid penalties wherever possible in favour of a simple reminder letter or warning: “In most case this is all that is required as most people aren’t evading the charges and are happy to pay for what they have used.”

The parking system is supported by a website where visitors can go online and pay for their charges until midnight the following day. Additionally regular users can set up an account by registering bank card details to allow their parking charges to be automatically deducted at the end of the month.

Whilst revenue generation is not the main priority for Land Securities, Veri-Park will help to make costs savings. “Raised barriers at peak times will no longer be an issue,” says Andrew Hiddleston, “and the use of ANPR will improve capture rates at the park. Therefore more income will come from the cars that do stay over the free hours.

“The Peel Centre had a very specific requirement which very much suits the benefits that can be achieved through the use of a Veri-Park system,” Andrew concludes. “We are very pleased to help Land Securities fix the congestion problem, and at the same time provide a user-friendly system for visitors that still allows them to benefit from the discounted parking.”