Timothy Haahs and Associates, Inc. (TimHaahs) served as the prime architect and engineer for the new state-of-the-art facility, which will serve as a gateway to the City. With approximately 16,000 square feet of ground floor retail, as well as space for a parking office, TimHaahs helped provide Atlantic City area residents and visitors with a new space to live, work, and play. In turn, this project has become an integral part of the CRDAs effort to transform the City into an investor-friendly resort destination, and renew the focus on Atlantic City as an economic engine for New Jersey. 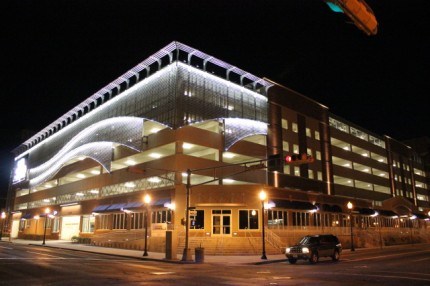 The structure features a number of unique elements, including metal screens with colored lighting, an LED digital billboard,and a large solar panel array that will help significantly off-set the energy use within the garage. This space also features driver-friendly incentives, such as an EZ Pass reader to provide patrons with a convenient alternative to cash or credit card payments, and six electric vehicle charging stations to promote and encourage sustainability.
These elements help the structure blend in with the vibrant atmosphere of the surrounding

area, as well as provide an attractive first impression to visitors arriving from the Atlantic City Expressway.
Further, the new mixed-use structure will help create an appealing  people place.