September 26, 2014 marked the first launch of Cale parking terminals in Jakarta, the capital city of Indonesia, a country with a population of 250 million people.

An initial number of around 10 terminals were installed in Sabang Street, one of the busiest streets in the City. The Swedish Ambassador to Indonesia, Johanna Brismar Skoog, as well as government officials of the City of Jakarta attended the launch ceremony. 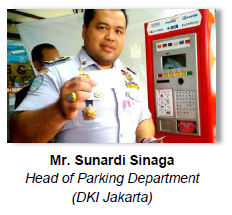 traffic congestion, the city government deemed the on-street parking solutions offered by Cale as important in reducing the traffic problems as well as preventing the misappropriation of the city’s parking revenue.

The reason Cale is well placed to provide the solution to parking management in Indonesia is largely due to its 60 years of expertise and technology-driven innovations. Its latest parking terminal is designed to meet any possible needs of the user while supported by a sophisticated back office web system and reliable personnel. The company’s business spirit lies in the sustained product development with end-to-end solution in sight and knowledgeable support team, which is something that the end users in Indonesia have greatly benefited from. 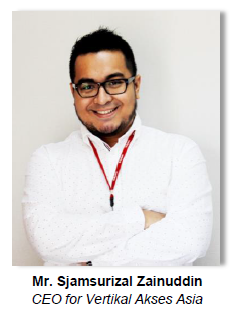 By partnering with PT Vertikal Akses Asia as Indonesia’s sole distributor, Cale is cementing its presence in the country by being the Jakarta government’s product of choice due to its technology and reliability. The parking terminals in Jakarta are operated and managed by PT Mata Biru, which has also been tasked in 2015 to install and operate the terminals in Bandung, a city of 2.5 million people, a 2-hour drive away from Jakarta.

Meanwhile, the second installation of close to 100 CWT Compact terminals in Kelapa Gading Boulevard of North Jakarta in March 2015 was the first of many to come for the city this year, where the government has estimated that more than 1000 terminals are required to cover the entire on-street parking locations in Jakarta.

So far, the implementation of on-street parking terminals in Jakarta has been met with positive response by the general public as well as the city government who has seen its revenues from on-street parking increase by 12-fold, as paying the fee at the machine plugs leaking revenues and promotes transparency and accountability.

As Cale reaches its 60th anniversary this year, and with plans of expansion in other cities of Indonesia, 2015 will be the year that the company further solidifies its presence in Asia.

Cale offers innovative and efficient parking solutions. From the start in 1955, Cale has developed into a world leading brand within the parking business, with a turnover close to half a billion SEK. Cale has subsidiaries, distributors and customers all around the world.

Cale specialises in customising technology, may it be for parking terminals, mobile payment solutions, transaction handling or centralised software systems, and converts this into functionality, always with the highest possible focus on the parking operator as well as the driver.

You are welcome to visit our website, www.calegroup.se, to read more about our products and services, or feel free to contact us.

I have a project that includes ticket machines for on-street parking and i am searching for a supplier. Maybe we can colaborate.