Uruguay, México and Argentina have this technology and soon will be installed in Paraguay

Latin America as a region present the right conditions to boost electromobility for several reasons. Three of the main automobile manufacturers operate at the region and Argentina, Brasil and Mexico have big amounts of lithium, an important material for EV batteries. Besides, Latin America has the highest percentage of renewable energy worldwide.

With these conditions it only took an adequate plan to start the transition to electromobility and this strategy is already kicking off. United Nations Environmental has implemented ‘Move’, a virtual community to accelerate the transition to electromobility in Latin America. This plan has four objectives: boost energy efficiency, eliminate market distortions (eliminate fuel subsidies, regulate taxes to used vehicles), create incentives for EVs and develop charging infrastructures. To be successful, these initiatives must involve several public and private entities with a coordinate strategy that will go beyond a specific initiative from a ministry or a national government.

Regarding this, especially in places such as Latin America where you need to travel long distances, electric highways play an important role. Circontrol has participated in the creation of three of these highways in Uruguay, Mexico and Argentina. And Circontrol’s EV chargers will also be present in the first electric corridor in Paraguay that will go from Asunción to Itaipu Dam that’s under construction. 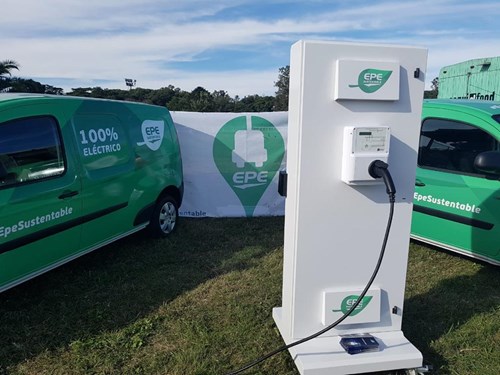 First electric highway opened in Uruguay by the end of 2017. It covers 300km from Colonia to Punta Este, two touristic cities on the coast that receive a great number of visitors. Six EV charging points manufactured by Circontrol have been installed, one every 60km. These chargers are AC Posts and 4 of them charge at 22kW and 2 at 43kW. In a second phase these EV charging points will cover all the country.

This year 2019 two new electric highways opened in Latin America, and they have also installed Circontrol’s products. In May the longest electric corridor open up in Mexico, this corridor goes along 412km connecting Ciudad de México and San Luis del Potosí and it’s operated by BMW and eDrive Mx. Along these 400km there are five charging stations with Circontrol chargers. Two kinds of chargers have been installed in every charging station: an AC WallBox that takes longer to charge the car, and a DC quick charger that can charge the EV in 30 minutes. These quick chargers are Circontrol’s Raption 50, one of its popular products with over 1.000 units installed in more than 26 countries, it is so popular because of its design and modular technology. These EV charging stations have been installed in touristic inns and service stations so drivers can take a coffee while they wait for their car to be charged.

This year 2019 also opened the firs electric highway in Argentina that covers 157km from Rosario to Santa Fe and there are 4 Circontrol charging stations installed. This was also the first highway in the country 60 years ago. This project has been impulsed by the local government that passed a ground-breaking law at the national level and Santa Fe’s Energy Providing Company that has created a specific program.

Circontrol has a strong presence in the international market, where 80% of its sales are allocated. Nowadays you can find Circontrol solutions in 52 countries with 30.000 charging points and 400.000 parking spaces managed with CirPark systems. Service is also very important for Circontrol, this is the reason why bet on a qualified aftersales service and constant training for Circontrol partners are in the company’s DNA.