Over a hundred electric vehicle industry experts from around the world met on 23 April at the Hotel Don Cándido in Terrassa to participate in the eMobility Workshop Network Event organised by Circontrol. Encouraging the use of electric vehicles and sustainable mobility is essential for energy efficiency and improving the environment, which are key challenges in the 21st century. This is clear to Circontrol, a manufacturing company based in Viladecavalls (Barcelona) founded in 1997.

Circontrol is a European leader in smart electric vehicle charging systems with over 20.000 charging points currently in use around the world.
The event was structured around four blocks of talks given by a dozen speakers and moderators from leading companies in the sector, with all those involved in the implementation of electric vehicles being represented, including car manufacturers, infrastructure providers, the energy sector, city councils and drivers. In fact, one of the objectives put forward by Circontrol general director Joan Hinojo at the start of the day was to obtain the general view of all these key players. Other aims included analysing the reason why electric vehicles have penetrated further in some markets than in others and how technology help to get them established.

One of the main focuses of the eMobility Workshop Network Event was analysing the sector in different markets. There was talk of Spain, with Arturo Pérez de Lucía, chairman of AEDIVE (Business Association for the Development of the Electric Vehicle) acting as moderator. but other markets where electric vehicles have made much more headway were the focus of discussion. Rami Syväri (Head of international expansion at Fortum Charge & Drive) presented the case of Norway, a leading country in the sector, with the highest number of electric vehicles per capita. Sales increased by 127% in 2014 and 25% of the vehicles sold there so far this year are electric.

Philippe Dupuy, head of Renault's electric vehicle division, reviewed the state of the European market, which has grown 20% since 2011. Dupuy noted that the sector is affected by three concerns that are of increasing importance to the public: the scarcity and rising cost of petrol, pollution levels and the state of our health, especially in large cities. He also pointed out that the future of the electric car depends on both technological advances and political measures. Supportive policies are needed, such as restricting access to certain areas to only electric vehicles, taxing polluting vehicles and incentives for a network of charging stations. The other key point, according to Dupuy, is improving vehicle charging.

The electric vehicle in the city 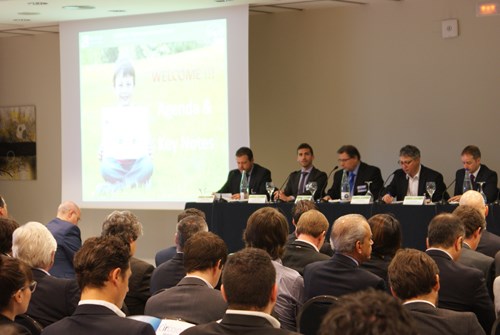 The involvement of cities is vital, so speakers with experience of encouraging the use of electric vehicles in their cities were also invited to take part in the event organised by Circontrol. Such was the case of Gary McRae from the city council of Dundee in Scotland. In 2011 the city launched a project to implement electric vehicles and today it has 48 charging points and is aiming to become one of the UK's leading cities in terms of air quality and environmental improvement.

Projects promoting the electric vehicle closer to home were also presented. Ignasi Armengol, general director of Barcelona Municipal Services, moderated the discussion and Àngel López, head of Barcelona's electric mobility programme, reviewed the development of this infrastructure in Barcelona. The plan began in 2009 with the installation of charging stations. It continued with the creation of the EV City Card, which identifies users (who now number more than 500 between both public and private vehicles) and allows them to charge their vehicles and park for free in green and blue zones. The next step, begun in 2013, is the installation of fast charging stations. There was also discussion of the addition of electric bikes to Barcelona's public bicycle sharing system, Bicing, from last February, with stations located outdoors and in car parks. Alberto Cáceres from Clear Channel, the company responsible for installing the bikes, explained the process.

There is also a lot of potential for the use of electric vehicles in the courier sector. La Poste, France's leading postal company, which has 24.400 electric vehicles ranging from bicycles to vans, is a prime example. Anthony Guilbert-Cholet, head of electric vehicle infrastructure at La Poste, stressed that it is the perfect means of transport for delivering post; it doesn't emit vibrations or CO2 and complies with urban traffic restrictions.

The importance of technology

Sustainable mobility is a young, growing sector in which technological advances, and therefore research, are essential. This is clear to Circontrol, which is why they brought together some of the leading figures in this field. Matthew Lumsden highlighted the importance of R&D centres, presenting the EVEREST project in which various companies are participating, including Circontrol. It aims to discover new energy storage systems and ways to give batteries a second life.

The energy sector is unquestionably key to the roll out of electric vehicles, which is why Narcís Vidal, senior manager of Endesa's innovation department, was invited to explain the company's commitment to electric vehicles and how the Enel Group, of which Endesa is part, is working towards a comprehensive solution for the electric vehicle.

As many speakers pointed out, charging standardisation is a key issue. Tomoko Blech, representative of CHAdeMO, an international association present in 340 countries with 8.000 charging stations that are already being used by 180.000 passengers, explained that CHAdeMO's aim is precisely to promote fast charging and standardisation.

Founded in 1997, Circontrol is a manufacturing company which constantly strives to innovate and develop solutions in the world of transport and electric vehicles.

From the beginning, it has dedicated significant resources to R&D, manufacturing top-quality products to become a leader not only in standard solutions, but also in specific solutions that meet market demands.

Its main activity centres on the development of:

The company is a global leader in its sector, with over 250.000 parking spaces managed using its efficient solutions for car parks and some 20.000 electric vehicle charging points in use around the world.