The Metrolink Public Transportation Station 2 MW Solar PV Carports and Electrical Vehicle (EV) Charging Stations Project in the City of Industry was unveiled to the public this morning during a grand opening ceremony that included California state senator Bob Huff and David Perez, mayor of the City of Industry, according to Oltmans Construction Co., a leading U.S. industrial and commercial general contractor, which constructed the project.

The City of Industry has provided a state-of-the-art renewable energy solution to today's growing energy needs by installing Solar PV Carports on an existing parking lot, providing electricity directly to the grid which powers the 64 EV charging stations also installed on the site. The project was made possible, in part, by a 20-year power purchase agreement offered by Southern California Edison.

"The City of Industry took the opportunity to convert the Metrolink station parking lot into a state-of-the-art solar power generating facility that provides power to the grid, along with individual charging stations for electric vehicles," said David Perez, mayor of the City of Industry. "Oltmans Construction Co. and Southern California Edison were great partners in this joint effort and the City appreciates all the hard work that went into this project."

Oltmans noted that the carport provides shaded area for 940 car stalls and generates 2 MW DC of electric power. This impressive project consisted of 8,372 modules including 196 LED carport lights using approximately 10 miles of conduit and 44 miles of wiring to complete the project. The carport structure itself is firmly supported on 190 concrete piles ranging in depths of 15 feet to 30 feet. The power system is capable of generating 2,900 MWh per year.

"Clearly leading the way to tomorrow, 64 electric vehicle charging stations were installed and incorporated into this City of Industry carport project in anticipation of a future trend planned for more use of electrically powered vehicles," said Tony Perez, vice president, Oltmans. "The eight month project was done in two phases, thereby minimizing any inconvenience to the daily heavy traffic of Metrolink customers," he noted.

Oltmans Construction Co., an industry recognized EPC Contractor, remains at the forefront of today's growing solar industry, having recently completed more than 25 MW of Solar Power Projects during the past two years, with an additional 10 MW currently under construction and a bright future with a significant surge of Solar MW installations ahead. 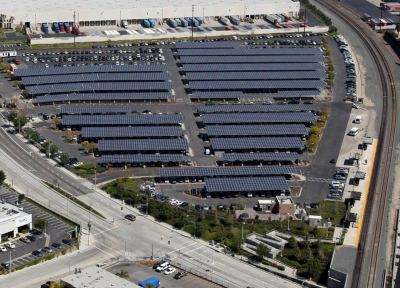