It’s quiet at the Commend acoustic test centre that late summer day ten years ago. Almost eerily silent, in fact. We are in the so-called “anechoic chamber” – known as the “dead room” among the engineers – at Commend’s headquarters. Chief audio technician Volker Schiffkorn is conducting the final quality tests of a world-first feature for Intercom stations.

Commend’s OpenDuplex® was to realise a long-held dream of the industry’s Intercom audio engineers: the possibility to converse over Intercom ‘naturally’, i.e., the way you would when talking face-to-face – without having to push buttons or anything. Since its introduction in 2003, OpenDuplex®  has been enhancing the Intercom experience in millions of devices, establishing an industry standard that no modern Intercom system could do without.

To make it all possible, it was necessary to overcome the technical challenge of the ‘feedback effect’. If the loudspeaker and microphone unit are close to each other in an acoustic setup, the resulting feedback produces the highly unpleasant squeal known from acoustically misaligned speaker’s desks. Telephones are immune against the feedback (owing to the isolating effect of the receiver), but Intercoms for a long time were considered an incurable case. 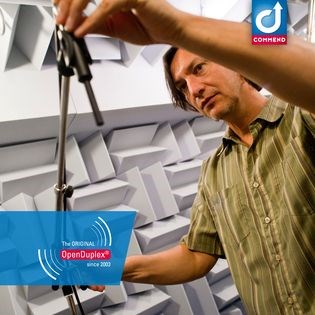 As with walkie-talkies, it was necessary to rely on the so-called Simplex conversation mode, where two calling parties can only listen or talk at any time, and they have to push a button to switch from listening to talking mode. The next stage, Switched Duplex, was much more convenient: this technology automated the switch between listening and talking by opening the talk channel to the louder voice signal (technicians call this “voice signal balance”).

Flashback to 2000: that ear the then new, powerful DSPs (digital signal processors) were dropping in price to the level of the previously used analogue processors. That was the moment Commend’s Volker Schiffkorn had been waiting for to launch his long planned push for hands-free, natural Intercom conversation. The idea on the mind of the chief audio engineer was inspired by a method for digital voice signal processing, which had already proven successful in digital conference systems and hands-free car speaker phones. The implementation proved successful from the get-go, and following a phase of further development and refinement, OpenDuplex® was ready for its launch in 2003.

The principle behind the solution is much easier to explain than to implement: the (digital) processor inside the Intercom station ‘subtracts’ the loudspeaker sound from the microphone signal, which prevents feedback loops from forming.

The challenge was to maintain convenient talking even in high volume levels. This states the different to other Intercom solutions which have to struggle with constant up and down adjustments, leaving much to be desired in terms of a natural, free-flowing Intercom conversation experience.