On the last official day of summer, under a cloudless sky, The Catholic University of America today celebrated the installation of 714 solar panels in the O’Boyle Hall parking lot with a ribbon-cutting ceremony. The addition makes CUA’s solar photovoltaic (PV) panel system the largest in the District of Columbia.

The system features more than 2,600 solar panels generating in excess of 830,000 kilowatt-hours of clean electricity per year. The solar panels were installed by Standard Solar of Rockville, Md., and are owned and operated by McLean, Va.-based Washington Gas Energy Systems as part of a 20-year power purchasing agreement with CUA, signed in 2009.

Opening the ceremony, Victor Nakas, associate vice president for public affairs, noted that 10 years ago last month, the University began its sustainability efforts with the purchase of wind energy credits. Now Catholic University is the greenest campus in Washington, D.C.

Several speakers at the ceremony noted that while the green energy produced from the panels was important, so were the learning opportunities the panels present.

President John Garvey explained that “activities like this are an important part in educating our students.”

“Part of being Catholic is a sense of gratitude for all the gifts God has given us in creation,” he said. “We want our students to show that gratitude for God’s creation by their respect for the natural environment. We want this to be part of what they learn here.”

“This is a fabulous installation,” said Scott Mathews, professor of electrical engineering and computer science. “It’s also a fabulous educational component. It reaffirms the commitment of the University to renewable energy and sustainability and educating the next generation of engineers and architects.”

As an instructional tool, Mathews plans to take one of his classes on their first field trip to the panels in the O’Boyle lot.

Sanjiv Mahan, vice president of business development for Washington Gas Energy Systems, commended the University’s vision of being a leader in sustainability and for “showing students how to be stewards of the environment” and how to use the solar panels as “learning environments for students.”

Scott Wiater, president of Standard Solar, Inc., also thanked the University for their “continuing sustainability efforts and for being stewards of the environment.” He noted that the company has hired several interns from CUA, some of whom have gone on to full-time positions with the company.

As an alumnus of CUA, Jose Sousa (B.A. 2001), director of communications for D.C.’s Office of the Deputy Mayor for Planning and Economic Government, said he was would proudly boast that he is a graduate of the greenest campus in the city.

Sousa pointed out that earlier this year, Garvey and the leaders of eight other Washington, D.C., higher education institutions pledged their commitment to an initiative by Mayor Vincent Gray — the first of its kind nationally — to make D.C. the most sustainable city in America.

During the ceremony, Rev. Jude DeAngelo, O.F.M., University chaplain and director of campus ministry, offered a blessing and sprinkled holy water on the system.

The ceremony concluded with a 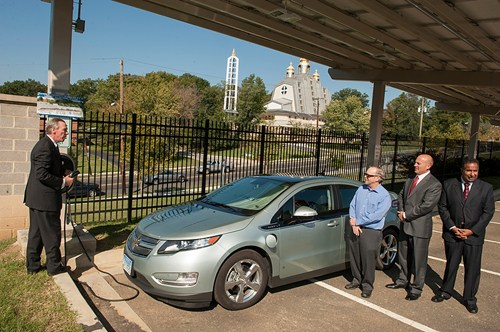 demonstration of how an electric car, like a Chevrolet Volt or even a sporty Tesla, could be hooked up to the solar-powered charging station in the parking lot.