EasyPark Group CEO, Johan Birgersson today announced the arrival of the beta version Find & Park in Stockholm, a new parking guidance service which helps drivers find an available parking space in the city. Find & Park holds your hand turn-by-turn along the optimal path to find available parking on the street, or in a garage close to your destination. 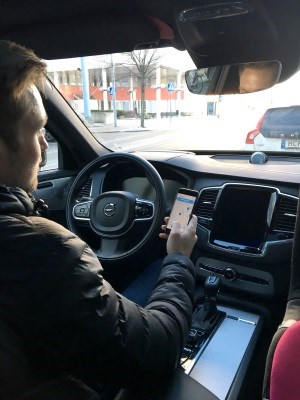 “Faster paths to available parking spaces not only reduce congestion and emissions, but also a lot of stress and frustration for motorists. Unlike expensive, sensor-based solutions, Find & Park combines parking data with various other unique data sources to then calculate the optimal route for drivers to find parking along the way to the destination,” said Johan Birgersson, CEO of EasyPark Group.

On average, Stockholm drivers waste up to 2040 hours in their lifetime sitting in traffic, and 30% of urban congestion is caused by people searching for parking.

“Preliminary testing of Find & Park in Stockholm has shown to reduce the amount of time spent searching for parking by up to 50 percent, which has the potential to have a truly powerful effect on both congestion and pollution in the city,” he added.

Drivers in Stockholm can now try the beta version of Find & Park for themselves within the existing EasyPark app, simply by tapping the ‘Find’ icon at the bottom left-hand corner of the home screen.

Finding a parking space in central areas of the city can often be both time consuming and stressful for drivers. A new survey from YouGov, commissioned by EasyPark Group, shows that more than 7 out of 10 Swedish motorists (77 percent) have felt stressed or frustrated due to difficulty finding parking. Therefore, EasyPark is offering drivers in Stockholm free ‘parking therapy’ with the help of a local psychologist, Malin Edlund.

The research showed that after less than 5 minutes, the mood of every third motorist becomes affected (31 percent) and they become stressed by the situation. To announce the launch of Find & Park in Stockholm, EasyPark is providing drivers with different methods and tools for stressing down while at the wheel.

“The EasyPark survey shows that more women than men feel stressed due to difficulty finding free parking space (81 percent compared to 74 percent). It’s widely known that high levels of stress can actually affect driving skills, so it’s not surprising that such a high proportion of respondents (47 percent) feel that stress in traffic makes them become a major traffic hazard, such as cases when they cannot find parking,” says Edlund.

Between 9 and 12pm on February 27, Edlund will be out on some of the busiest streets of Stockholm, offering motorists tips on how to stay calm when driving during peak hours and searching for parking.

To see how Find & Park works:

The survey was conducted by YouGov, commissioned by EasyPark in Sweden in February 2018. 1 008 respondents participated in the survey conducted in YouGov's web panel with respondents in the age 18 years and over. The panel is a national representative.

Since 2001, our award-winning smart services have been helping drivers to find and pay for parking in close to 700 cities in 11 countries. But what we do doesn’t stop there. On a larger scale, our technology helps businesses, operators, and cities with parking administration, planning and management. What we actually do is make urban life easier – one parking spot at a time. Visit www.easyparkgroup.com to learn more!