The French city of Nice is leading the way in modernizing street side services by combining parking, EV charging and modern internet based city-services into one centralized system. The heart of the system is the new Ensto Chago multiservice kiosk.

The Ensto Chago Kiosk is an intelligent solution that offers parking metering, an integrated EV charging solution and a diverse range of internet-based services all in one. These are accessed with a touch screen and a Wi-Fi connection enabling web-based payment and distribution of services such as timetables, maps and information about city services, culture, events and entertainment.

Semiacs, a semi-public company in charge of public parking in the city of Nice, initiated the project by requesting more intelligent and versatile solutions to replace traditional ticket machines. The result - The Ensto Chago Kiosk – was then developed in cooperation between several companies.

The innovative kiosk received critical acclaim already in the beginning of the project, winning the Award for best innovative Smart City project in the worldin World Congress expo Smart City fair held in Barcelona in December 2011.

The installation of Ensto Chago Kiosks in the first testing zone started in March 2012, and the new intelligent parking system based on the kiosks will be up and running during 2013.

So far 70 kiosks have been installed in the heart of the city center. They are connected to the system and ready to help people from the end of November 2012.

The kiosks facilitate smarter movement in the city and also the information flow. They ease the availability of parking spaces and even provide an emergency call service.

When finished, the smart system equipped with Ensto Chago Kiosks will cover the whole urban area of the Nice municipality.

The city department services also benefit by the generated information exchange, by being able to standardize all services, reduce operating costs, visual pollution and congestion on pavements and by facilitating the street side parking control. 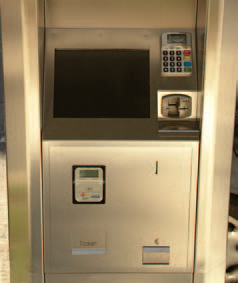