Ensto takes part in an international project that has developed a new kind of innovation, a multiservice parking kiosk. The multiservice kiosk is an intelligent solution combining parking meter, electric vehicle charging and internet-based city services. The kiosk is part of a new parking system being introduced in Nice, France.

Urban parking and other traffic solutions have to develop constantly as traffic increases and becomes more versatile. Semiacs, a semi-public company in charge of the Nice street parking and its 17 car parks, has launched a new generation of ticket machines that prefigures the city of tomorrow. Ensto has had a strong presence in developing and realizing the project which reflects modern, innovative and sustainable urban planning. 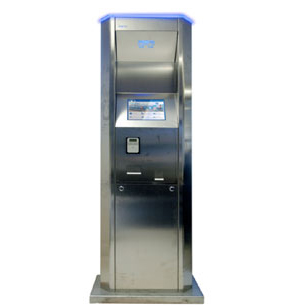 The heart of the new parking system is a multiservice kiosk that will replace traditional ticket machines. In addition to handling parking fees it offers an integrated EV charging solution and a diverse range of urban services. It includes a touch screen and a Wi-Fi connection, enabling the use of internet-based services, such as timetables, maps and information about city services, culture, events and entertainment.

The multiservice kiosk was developed as a result of cooperation between several companies. The project was set in motion by SAS Sude, a French engineering consulting firm specializing in the urban space management and mobility. Spanish-based Urbiotica in turn provided the sensors and the necessary technology to collect relevant data from urban surroundings.

Ensto developed and built the "hard" part of the kiosk: the stainless steel structure and electronic components, and added in the system the electrical charging solution. Ensto EVC charging station, which integrates seamlessly into the payment system of the kiosk, was chosen for the project.

The innovation received critical acclaim already in the beginning of the project, as it won over the jury of the World Congress expo Smart City fair held in Barcelona in December 2011. Facing over a hundred innovations from 19 countries, the project stood out for its originality, winning the Award for best innovative Smart City project in the world.

Nice to show the way as modern parking city

The multiservice kiosks will be installed in Nice in March 2012, and the entire system will be up and running during 2013.

In addition, from January 2012, sensors will be installed for the 10 000 street side parking spaces in the city. The sensors will provide real-time information about available parking spots that can be accessed via smart phones. This significantly reduces the time used driving around looking for free parking space, easing traffic congestion. Convenient for drivers, this system will help improve traffic flow in the city center, while optimizing the management of places," says Benoit Kandel, President of the Semiacs who initiated the project.

The project and its intelligent innovations will benefit the city of Nice and its inhabitants, says Kandel. Their experience will undoubtedly shape the future development of modern parking services. Thanks to this project, Ensto will have a great position in this development.