INRIX published a major new study that analyzed and ranked the economic costs of “parking pain”. The study found that German drivers spend an average of 41 hours a year searching for the elusive parking spot at a cost of €896 per driver in wasted time, fuel and emissions and the country as a whole €40.4 billion. The study combined data from the INRIX Parking database of 100,000 locations in 8,700 cities in more than 100 countries, with results from a survey of nearly 18,000 drivers in the US, UK and Germany, including almost 5,000 in 10 German cities.

Frankfurt ranked as the worst city in Germany to find parking. On average, drivers in Frankfurt spend 65 hours a year searching for a space, costing them €1,410 each in wasted time, fuel and emissions and the city as a whole €702 million. Essen came second in the ranking (64 hours - €490m), followed by Berlin in third (62 hours - €1.8bn), Düsseldorf in fourth (61 hours - €564m) with Cologne (60 hours - €861) rounding out the top five cities. Berlin has a much greater economic cost impact of searching for parking due to the city having a higher population and more cars and drivers.

“If we add up all the costs in this research, so the time spent searching for a space, the amount drivers overpay for parking and the amount spent in fines, he “total” cost of parking pain in Germany is almost €45 billion a year,” said Dr Graham Cookson, Chief Economist, INRIX. “This cost is not only borne by drivers, but also by businesses as people avoid shops due to parking issues. There is an information problem as much as a parking problem in Germany. A problem that technology can fix.”

Germany – A Country of Parking Offenders

The study found that half of the drivers surveyed in Germany received a parking ticket over the past year – twice as many as in the US or UK – at a total cost of €380 million. More than a half of respondents (57%) wouldn't pay for parking at all if they believed could get away with it. In terms of fines, drivers in Stuttgart (1.5 tickets per driver) followed closely by Frankfurt (1.4 tickets), Berlin and Cologne (1.3 tickets) received the most parking tickets per person in Germany over the past year.

Germans Spend more than €4 Billion a Year Overpaying for Parking

The survey asked drivers how much extra time they typically add to a parking session to avoid a penalty charge. In Germany, drivers add on average an extra 42 hours a year when paying for parking. When combined with INRIX parking rate data, overpaying for parking is estimated to cost €4.4 billion annually or €98 per driver. Drivers in Frankfurt, Essen and Stuttgart overpay by almost twice the national average at 71 hours per annum, which amounts to €217 million for the three cities combined.

Parking pain has considerable non-economic consequences as well. For instance, two out of three drivers in Germany felt stressed trying to find parking, while one in five reported a conflict with another driver over a parking space. A further 44% missed an appointment and almost one in three (27%) abandoned a trip due to being unable to find parking. More than half (53%) of motorists think there are not enough spaces available and 43% said taking up two spaces is the worst parking ‘sin’.

Dr Cookson concludes: “To lessen the significant burden parking pain has on our economy and lives, smart parking solutions are available for drivers, parking operators and cities to help reduce search times, congestion and pollution as well as negate overpaying and fines altogether. Still, more needs to be done to drive adoption. Parking pain will only get worse until technology is fully embraced.” 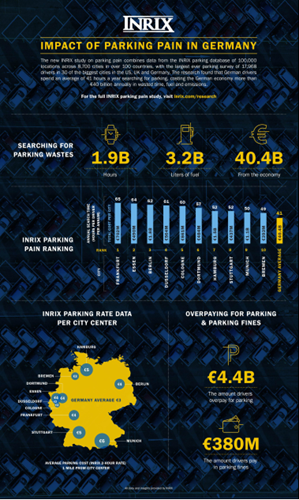 INRIX combined rate card data from the INRIX Parking database of 100,000 locations across 8,700 cities in 100 countries with survey responses from nearly 18,000 drivers in 30 cities across the US, UK and Germany. Combining these datasets enabled INRIX Research to calculate the economic cost of three measures of parking pain: parking search, parking overpayment and parking tickets/fines.

The weighted average of on-street and off-street search time was multiplied by the average number of times per week respondents parked. Value of time was based on UK Department for Transport values of time figures converted to Euros using the relative UK and German median hourly wage. Parking search costs also include the value of wasted fuel and carbon emissions.

Overpayment was calculated by using the average amount of time (in minutes) that respondents overpaid for parking each time they park to avoid tickets, towing, or hourly rates set above the amount parked. The cost of overpayment was estimated using the weighted average of on-street and off-street parking rates. Parking fines were based on reported frequency and assumed all local/federal tariffs and discounts were applied. All annualized calculations assume a 48-week year.

INRIX smart parking solutions get real-time parking information to drivers on the go, curbing traffic before it starts. INRIX Parking also provides cities with actionable information they can use to improve parking management and policies.

We engage cities, automakers, private parking operators, and parking equipment makers to create the ultimate parking experience for drivers. By combining raw data from existing parking infrastructure with acquired data from more than 300 million connected devices, we can guide drivers to the best available parking options.