A history of cellular technology, cloud computing, and webbased transactions leading to the IoT revolution—explored through the lens of the smart parking meter.

As seen in Parking Today

Until now, he’s right. Each company that deals in smart technology has coined different terms. We’ve seen Machine to Machine Communication (M2M), the Internet of Things (IoT), and now the Internet of Everything (IoE)—in short, all involving devices that transcend their respective roles and act with “intelligence.” But as suppliers and administrators, we’ve never felt more uncertain about our current resources as it relates to the pace of technology.

To define the Smart City, we must first ask a couple questions: What advancements made us so smart? What can the systems do today? And most importantly, where are we going next? The rise of the Smart City can be understood through the lenses of technology and psychology—specifically, through three crucial paradigm shifts.

From bricks to microchips

The world’s first mobile phone was developed in the 1980s. It weighed in at 28 ounces, was nicknamed “the brick,” cost over $9,000, and lasted about half an hour on battery power. We’ve come a long way in the past 30 years, with transistors, integrated circuits, and microprocessors, and we’ve grown accustomed to low-power, high-performance devices that communicate over reliable cellular networks. For most of us, long cell phone battery life and reliable coverage are requirements—and for that reason, low-power and sophisticated-function have been dialed in by industry giants. Since the invention of “the brick,” cellular technology has advanced at record speed, paving the way for other smart devices to benefit from smaller, faster, and more powerful components. “Over the past 30 years, the mobile phone has been reimagined and wholly revolutionized. Today, we are also beginning to reimagine the role of technology and connectivity in our cities and infrastructures. From street lights to trash cans to parking meters and payphones, we’re using the expertise that revolutionized the smartphone to transform infrastructure and create smarter, more connected ecosystems,” said Kiva Allgood, Vice President, Business Development for Smart Cities at Qualcomm Technologies, Inc.

Smart devices likewise can attribute their success to cloud computing and to the relatively new world of cloud data storage—another paradigm shift. Before the cloud, all device data was stored locally, requiring each device to store all of the information and instruction sets required to complete its respective tasks. And while in the past some devices could be synched occasionally, the smart device of today is inseparable from the cloud, exchanging data on a continual basis. However, the storage and power required to either process data locally, or makes power efficiency impossible without developing a more robust and power efficient IoT solution.

The final change—a shift in public psychology—increased public acceptance of new payment methods. Before the development of iTunes® in 2001, low-value transactions were rarely performed with a credit card. For most, it seemed unreasonable to put a $1.00 transaction on credit. However, with the widespread popularity of music downloads, people began to think nothing of paying $0.99 per song. The “App” revolution came next, phones became “smart,” and low-value transactions by credit card became an everyday occurrence. “As every connected device is becoming a commerce device, more and more consumers are experiencing the convenience and security of paying for everyday items with their phone, tablet, or wearable. Increasingly, smart devices work as the ‘remote control’ through which users unlock experiences and services that a city has to offer—from discovery and navigation through to payments and rewards,” says Michael Cyr, Executive Vice President, US Market Development, MasterCard Worldwide. 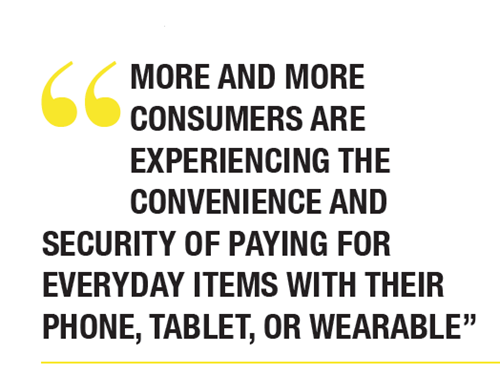 As cellular technology grew smarter and people wanted the convenience of card payment everywhere, customers began to look for a smarter way to pay for parking, seeking innovation beyond antiquated coin-only meters. The public wanted to pay with their credit cards and administrators wanted to remotely monitor and configure their parking hardware from a central management system. The multi-space pay station, networked to accept multiple forms of payment, began to rise in prominence. However, some cities also felt that pay stations were expensive and not as user-friendly as single-space meters had been. While its development was not originally obvious, we know now that smart single-space meters are the fastest growing meter product segment in the USA.

However, a smart meter is not the only resource in a smart parking system. Vehicle detection sensors have redefined the parking meter’s functionality by facilitating meter reset functions, offering adjudication records, and more. In addition, smart collection systems, wayfinding and enforcement applications, and multi-space retrofit kits serve all needs. A powerful data management system is critical to remotely program meters, monitor a city’s parking trends, offer resources to make data-driven policy decisions, and integrate all parts of the parking system together. IPS Group’s goal is to build an integrated and comprehensive product suite.

Intelligence of the future

Looking at the “smart” meter brings us to our final question, what is intelligence? Is it simply the ability to communicate over a network? The word “intelligence” is typically defined as an individual’s capacity for logic, abstract thought, self-awareness, and problem solving. For King, intelligence means the ability to make localized decisions. This is the secret behind IPS Group’s smart products and provides a glimpse into what it may mean to be a smart device of the future.

In computing, “decision-making” is a matter of data input and output. External data goes in and the computer acts based on a set of pre-configured instructions. New data flows out. Decision-making occurs in the brains of the device. Currently, there are two schools of technology, with associated philosophies, defining how that data is processed, and more importantly, where.

Brains in the cloud

Nowadays, everyone has heard of “The Cloud.” We use it to store files, as a backup repository, and even as a primary workspace. When using cloud technology to connect smart devices, data is transported from each local device to a centralized point: the cloud. In terms of IoT, a data repository is required for fragmented devices to functionally integrate. 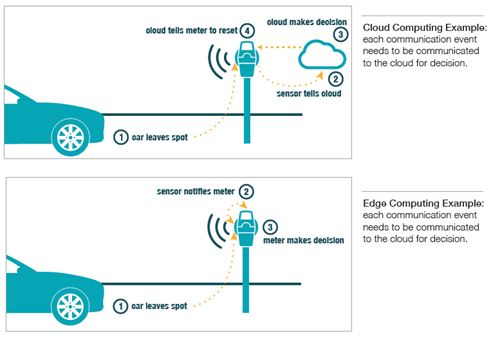 However, if every occurrence at the meter is transmitted to the central repository, with instructions transmitted back, then data is almost constantly moving back and forth. Veteran technology journalist, Steve Walstrom, describes the problem with this model: “the issue today is the need to process both the volume and speed of data generated by thousands, perhaps more, of devices that IoT contributes.”1 In addition to a data processing issue, constant communication means constant power usage, creating a high-power, energy-inefficient system. Further contributing to the problem, data latency often impacts decisions that need to be made almost instantly.

But what if the devices could be smart enough to talk to each other and then make intelligent decisions locally?

Decisions on the edge

Enter edge computing, or decision-making power on the edge of user interface. In edge computing, knowledge is generated at the data source instead of in the central repository. This significantly decreases the volume of data that must be moved—and the subsequent noise—thereby eliminating a potential bottleneck, increasing speed, and improving quality of service.

In the parking meter example, the sensor communicates with the meter directly as opposed to traveling to the central repository. The meter is intelligent enough to say, “When a car leaves, reset to zero time.” The decision is made instantly—and the meter resets almost immediately upon the departure of a vehicle.

Essentially, this is an advanced form of two-way communication. The sensor and the meter can communicate forward and backward with one another and with the central repository only when needed. Two-way communication enables each device to be “smarter” by empowering local decision-making as opposed to relying on cloud-based decisions.

This is not to say that a parking meter can do everything by itself. High-level decisions are required to update meter settings and to solve system-wide analytics regarding city-wide performance. However, not every parking meter occurrence requires such a high level of thought. If a car pulls out of the parking space, the meter can reset to zero. If a quarter is inserted, the meter can update to 15 minutes of paid time. If daylight savings time begins, the meter’s atomic clock can update instantly. If vehicle occupancy use patterns change, meters and sensors talk to each other and make local decisions on rates or maximum stay periods. Rather than sending data to the cloud and asking “what do I do?” the meter can automatically act based on a set of pre-configured instructions.

The IPS philosophy has looked to companies like Apple® for inspiration—create a low-power, simple yet powerful, fully-integrated system by providing not only innovative software, but intelligent hardware. “IPS has been delivering IoT and Smart City solutions to our customers for years,” says Chad Randall, IPS Group COO. “We just didn’t know early on what it was called until these terms became more commonplace.” IPS Group’s smart meter products and sensor systems are unique. They were designed to make fast, local decisions by themselves—as opposed to transmitting data to the cloud. “Making decisions on the edge is embedded into everything we do,” says Randall. 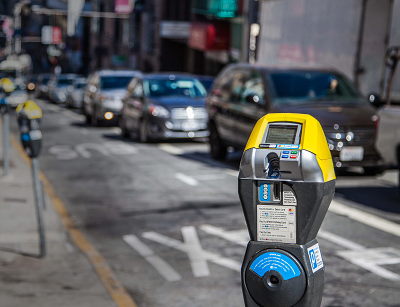 A city is only as smart as the technology within it. Self-aware devices working at maximum efficiency, maximum speed, and minimum power; reducing the carbon footprint and eliminating noisy data; providing City staff with reports and analytics to make informed decisions—now that sounds smart.

Stop by the IPS booth 03.204 at Intertraffic Amsterdam 2016 to see our smart parking product suite.

1. Used with the permission of http://thenetwork.cisco.com/.