The city center of The Hague is characterized by its narrow road infrastructure. Being the government capital of the Netherlands, seat of embassies and consulates, home of international law and a major tourist destination, it is a challenge to keep the historic city center accessible, livable and safe. To improve traffic flows, by reducing vehicles for parking and traffic in transit, The Hague implemented Nedap’s MOOV. This solution controls vehicle access to traffic regulated zones.

Dutch city of The Hague

For a city-wide network of more than 70 vehicle entrances, MOOV ensures that only authorized vehicles can enter a barrier-controlled zone when having a permission. As a result, the streets and squares in the city center of The Hague changed from vehicle-dominant occupation into high-quality, attractive and safe public spaces for pedestrians and cyclists.

With about 450.000 inhabitants, The Hague is the third largest city of the Netherlands, after Amsterdam and Rotterdam. The city has the status as a hub for politics and international law. While Amsterdam is the capital, The Hague is the seat of the government of the Dutch kingdom and more than 100 embassies and consulates. Along with cities like New York and Geneva, The Hague is an important city for the United Nations, with its International Court of Justice and the International Criminal Court.

Situated on the North Sea coast, The Hague is also a major tourist destination. During the summer months, many people visit the beaches near the city. Such a city attracts a lot of international organizations. The Hague is home to the world headquarters of Royal Dutch Shell and numerous other major national and international companies. 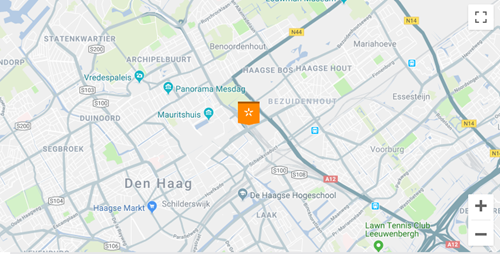 Cities like The Hague are facing a growing number of people and vehicles in a complicated narrow road infrastructure of the historic city center. Finding a safe way through the city traffic is not easy for most people living and working in the city, let alone visitors and tourists.

Pedestrians and the huge number of cyclists are faced with the result of that on a daily basis. Vehicles pollute, occupy a lot of public space when parked, cause congestion and also pose a potential safety threat. The Hague is challenged as governmental capital to empower demonstrations, manifestations and VIP-visits, to increase security levels when needed, where needed.

Mitigate the risk with vehicles in the city

Vehicles are the number one mode of transport in urban environments in the world. Most cities will see that the vast majority of transport of people and goods is carried out by cars, trucks, taxis, buses and other motorized vehicles. Therefor it is absolutely vital that cities like The Hague can facilitate these vehicles to do their job while citizens and visitors enjoy the shopping areas, museums, beaches and other touristic sights. Unfortunately the trend that vehicles are utilized as weapons in more and more incidents of a terrorist nature cannot be ignored. It is impossible to make cities 100% safe from attacks with vehicles, but the authorities in The Hague developed strategies to mitigate the threat.

Cities never can be completely free from vehicles. Restricted vehicle access is essential for several functions, such as for residential cars, emergency vehicles, logistic trucks or public transportation. The Hague does not want to ban all vehicles from the city center, but it would like to reduce the number of vehicles in the streets for parking or as traffic in transit. With implementing a system that controls all vehicle entrances to the traffic regulated zones, The Hague ensures that only authorized vehicles can enter the barrier-controlled zones when having a permission. This resulted in changing the streets and squares from vehicle-dominant occupation into high-quality and attractive public spaces.

In 2010, The city of The Hague decided to implement a dedicated access control system that controls the vehicle entrances of the city center with innovative technology. Dynamic physical bollards effectively prevent unauthorized vehicles from entering. Automatic vehicle identification systems like long-range RFID and ANPR ensure that residents, police cars, licensed taxis, government cars and emergency vehicles can get easy access without compromising security. Retail suppliers can be provided with an exemption and can be allowed access in specific time zones during the week. This city access control system is based on Nedap MOOV, a web-based technology platform, specifically developed to control a city wide network of vehicle entrances. MOOV allows 24/7 remote control of video, intercom, RFID, ANPR, ground loops, traffic lights and dynamic vehicle barriers like bollards.

Nedap MOOV ‘112’ supports the Safety Region Haaglanden initiative. This Safety Region is responsible for disaster management in the Haaglanden region. Part of this initiative is that all emergency vehicles, police cars, ambulances and fire trucks, in this Safety Region are equipped with an RFID tag. In the event of a critical situation these emergency services automatic can pass through all barrier-controlled vehicle entrances fast, secure and without congestion at any time.

Like in many other cities and towns in Europe, the public road infrastructure in the city center of The Hague was never designed for the enormous growth of people moving in the city by car, public transport, bicycle and foot. Every day citizens and visitors share the public areas, streets, squares and parks in the city. The Hague is a perfect example where the city authorities decided to protect the users in their urban traffic challenge. The big advantage of Nedap MOOV is that you keep the people and vehicles moving, while security and safety levels are optimized. Citizens are better protected without forcing the city to come to a full stop. Over 70 cities in the Netherlands deploy Nedap MOOV and are able to deal smart with all the current and future challenges that relate to mobility, security and safety. This makes the city more attractive, well accessible and minimizes hazardous situations.

The key features of Nedap’s MOOV solution include:

Since the company’s founding in 1929, Nederlandsche Apparatenfabriek ‘Nedap’ N.V. has been manufacturing smart technical applications for the challenges of today and tomorrow, and selling them all over the world. Headquartered in Groenlo in the Netherlands, Nedap boasts a workforce of approx. 680 employees and operates on a global scale, while the company has been listed on Euronext Amsterdam since 1947.