Anyone who’s ever driven in a city can attest to the fact that it’s an utter pain in the rear to find somewhere to park. New York in particular is a nightmare for skittish drivers (like myself), but mobile parking service Pango is poised to help ease the hassle of city cruising and parking.

After launching in Israel in 2007, their zeal for expansion has prompted Pango to take their first official step into the United States with the launch of their mobile app and their first so-called smart garage in New York City (on 77th and Lexington, to be more precise).

Here’s the onboarding process in a nutshell — after installing the app (available on iOS, Android, or BlackBerry), potential parkers are tasked with creating an account and will need to plug in their license plate number and credit card credentials in order to be properly tracked and charged.

After that process is over, users will be able to search for different Pango locations to park at, but for now users in NYC need only pull into the smart garage and press a button to summon a valet. Once users are done poking around the Guggenheim (or whatever it is people do in the Upper East Side), they can use the app to alert the garage that they’re on en route back to their car, so the vehicle can be prepared to go. The amount owed is charged directly to the card on file — the service doesn’t currently cost anything beyond the garage’s usual fees — so all that’s left is to hop in and speed off. 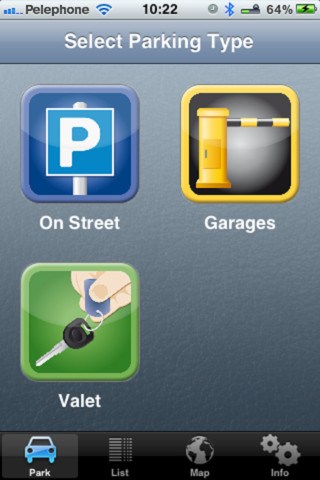 And this is just the beginning — Pango told TechCrunch that they’re targeting other major metro areas to expand into, as well as bringing their on-street and non-valeted garage parking models live over the next few months. In fact, they’re already made some progress on that front as they soft-launched their on-street mobile parking service in Latrobe, Pennsylvania of all places last month.

It’s a funky concept to be sure, but it’s one that certainly seems to be doing the company well. At last glance, the company has entered into app-friendly partnerships with parking garages in 50 cities across five countries — Israel, Poland, Germany, France, and the U.S. What’s more, the company handles more than 2 million parking transactions monthly, and make their money by splitting revenue with the garage proprietor or the owners of the areas where they plan to set up their Pango parking meters.

Now there’s no shortage of services looking to disrupt the odious process of parking — Panda and Disrupt Battlefield finalist KurbKarma immediately spring to mind — but what makes Pango such a compelling option is the lack of friction involved. Exchanging pleasantries with the valet aside, the entire process essentially consists of a few button presses. At this stage though they’re being outpaced by some of the competition (Panda is currently live in Baltimore and Washington D.C. with two more cities waiting in the wings), and while their momentum has seen them take hold in 50 cities in just under five years, only time will tell if they’re able to replicate that level of success in the States.

Pango Mobile Parking eliminates the need for coins with exact change, you don’t have to walk out from your car to activate parking, or to look for the closest paying station. When your parking session is about to expire, Pango sends you a reminder, helping you avoid costly parking tickets.

Pango Pay-by-phone, the smart way to put an end to your parking frustrations.