APNE 2022
After a long selection process, O.E.B., the parking operator, together with the urban services of Mexico City, have chosen Parkeon to equip the streets of the upscale neighborhood of Polanco in the heart of the city. It is the second success for Parkeon in Mexico City, following on from the installation of 140 terminals in the Juarez area, last year. 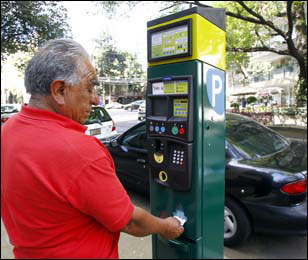 With more than 20 million inhabitants, Mexico City area, one of the most populated cities in the world, is facing major problems of urban mobility and pollution generate by traffic.

In recent years, the Mexican authorities have tried to improve the quality of life of their citizens and set important objectives to facilitate urban travel: extension of the subway, creation of exclusive bus lanes for public transport, development of interoperability between different public transports, setting up a program of self-service bicycles. For the individual vehicle, the authorities are building new highways and want to regulate the on-street parking to improve traffic flow while preserving the environment.

"Parking terminals in Polanco will be a model for regulating the parking, says Daniel Escoto, Head of the Citys Public Space Authority. " The idea is to establish the payment of a parking fee to encourage citizens to use public transport or carpooling, a concept that is not well known here ".

In the district of Polanco, where a large number of restaurants and boutiques are located, the goal is to boost trade by allowing users to park more easily. The willingness of Mexican Authorities is, at the same time, to clean up their towns by eradicating wild racketeering in the streets, money charged by "franeleros", a Mexican term to describe the "human parking meters".

Our local partner SIMEX, has already installed 300 Strada Rapide terminals in the district and 140 additional terminals to be installed at the beginning of April. All terminals are pre-equipped to accept a contactless card which will be available soon as well as bank card payment. All data is centralized via the Parking Management system myParkfolio.

Well received by users, the parking terminals have already helped to improve traffic flow and it is now possible to find a place to park in this neighborhood, so the Mexican Authorities are analyzing extend the program to other areas in the City.