Barclaycard and Parkeon have been the vanguard of contactless credit/debit card payment technology for the parking industry, trialling the first Pay and Display (P&D) terminals used in Britain for Westminster City Council in 2009.

Three years on, the 'wave & pay' approach is taking root. Barclaycard has issued over 26 million contactless cards, split almost 50:50 between the credit and debit versions. These cards are accepted in over 120,000 terminals and 50,000 outlets throughout the UK.

In the parking sector, Parkeon has installed significant numbers of new contactless-enabled parking terminals nationwide, with installations in towns from Blackpool to Southampton. Parkeon has also retro-fitted contactless card readers allowing over 700 existing terminals to be upgraded for 20 UK parking operators.

After a slow start, awareness of the 'wave & pay' concept is growing among both parking operators and their clients, said Danny Hassett, Parkeon's parking director UK/Ireland. "There's no denying that the take-up of contactless card payment facilities has been a 'slow-burn'," he says. "I believe a factor for the slow take-off is that – with the exception of Barclays – the banks have delayed investing in technology because of the economic climate since 2008. However, we're now seeing an increasing number of customers specifying the technology, either as original equipment or an upgrade."

Hassett adds: "I believe that Parkeon is still the only manufacturer offering an integrated card reader that enables users to transfer seamlessly from a contactless to a Chip & PIN transaction, as they will occasionally be required to do in order to confirm their identity. This is to help prevent the misuse of lost or stolen cards."

Britain's banks are now following Barclaycard's lead. HSBC started rolling out contactless cards in May, replacing expiring debit cards with new ones containing contactless technology, rather than sending every customer a new card in one go.

Lloyds Banking Group already has approximately 1.5 million contactless debit cards in issue across the UK (a million Lloyds TSB customers and half-a-million Halifax and Bank of Scotland clients). It expected to have a total of two million contactless cards in circulation by this summer.

Until recently NatWest has offered contactless credit cards to selected customers and contactless debit cards on request to eligible customers. It is now increasing the number of contactless cards issued, initially focussed on debit cards used within London and the South East.

Parkeon's Hassett says: "We are pleased to see that the other banks are now investing in contactless technology. It has to be the future as we move towards an increasingly cashless society. It's certainly what our customers want." 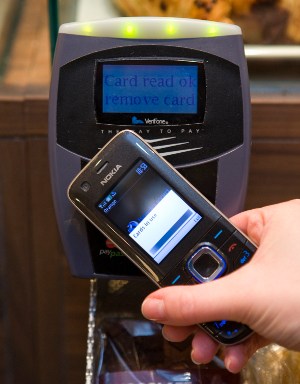 The way in which people live is being rapidly tranformed by the mobile phone. "Think back; Twitter was in its infancy during the 2008 Beijing Olympics, now it's ubiquitous!" observes Hassett. "Such developments are the future. In time, we may well see contactless payment solutions incorporated into wrist watches, pens or car keys. Whilst there are currently few providers of contactless-enabled mobile phones, their introduction is imminent. However, they may be a stepping stone to future contactless-enabled media."

Parkeon has already demonstrated contactless mobile phone payments in parking at Intertraffic in Amsterdam earlier this year. "Since then, mobile operator Orange has launched its Quick Tap phone," he says. "This can be loaded with funds from any UK issued MasterCard or Visa credit or debit card, including a Barclaycard, Barclays debit card or Orange credit card. The sum due is taken off the stored Quick Tap balance via a contactless reader whenever owners use it to pay for goods and services."

However, while Parkeon welcomes the technological revolution, it says it is important to recognise that not everyone has access to smartphones or debit and credit cards. Hassett says: "Parkeon believes that drivers should always be offered a choice of payment methods to pay for parking, not only for optimum customer convenience but also to be as democratic as possible. Not everyone has a bank card or mobile."

"It is also wise to have alternatives in case of system failures. What happened to those parking operators totally dependent on mobile phone-based solutions when the O2 network went down earlier this year? Under such circumstances contactless cards would still operate and are more resilient."

Transport for London (TfL) is introducing contactless payments, enabling users to 'hop & pay' on London's 8,000 buses, by the end of 2012. The technology will also be rolled out onto the Underground and Docklands Light Railway (DLR) by the end of 2013.

Drivers using the M6 Toll Road have been able to pay for their journeys using contactless credit and debit cards since February. The operator worked with Barclaycard to install easy-to-use contactless payments at its toll booths, allowing customers to pay for journeys by holding their card over a terminal.

Danny Hassett says: "Contactless cards are the quickest and easiest form of on-site payment for drivers to pay for parking and tolls, as well as purchasing tickets to continue their journeys via other forms of transport. They just make life simpler, reducing queuing in car parks and at transport hubs, alike."

The London Olympics have also showcased that 'wave & pay' is a winning technology, said Hassett. "Bringing the development of contactless card payments bang up-to-date, every sales terminal at Olympic venues was wave & pay-enabled," he said. "I predict they will become the gold standard for the majority of purchases in time."

In mainland Europe Parkeon has supplied and upgraded 500 Strada terminals with its integrated MR40 card readers for the city of Milan. The machines are equipped with a PIN pad and radio frequency identification (RFID) antenna to meet the Europay, MasterCard and VISA (EMV) global standard for processing credit and debit card payment chip-based cards. The Parkeon machines accept PayPass and Pay Wave contactless cards. "The terminals also accept the local transport authority's contactless ATM cards," says Hassett. "They can be reloaded on the Stradas, of which a further 1,000 are forecast to be installed during the current year."

Milan's Stradas feature an on-screen, electronic keyboard on which users can identify themselves with their vehicle registration plate details. This enables them to pay the City's active congestion charge, which includes a free two hour parking ticket. The service is accessed daily by over 10,000 users, who will soon be able to pay parking fines in the machines too.

The French city of Strasbourg, meanwhile, has upgraded nearly 800 Parkeon Strada terminals to handle contactless cards. The Stradas have also been equipped with near-field communication (NFC) technology, enabling them to handle payment by contactless payment-enabled mobile phones, should the City wish to do so. Hassett says: "Furthermore, parking revenues have increased by 20% in Paris, where Parkeon terminals have been bank card enabled."

Putting parking in the frame

Ranger Services first applied ANPR to car park enforcement in 2003. It now operates over 700 sites nationwide and captured over one billion number plates in 2011. "Our partnership with Ranger Services means that ParkREG will be supported by the most reliable and well-established ANPR system in the parking enforcement and traffic management industries", explains Danny Hassett, Parkeon's parking director: UK & Ireland.

The combination of Parkeon's ParkREG solution and ANPR technology provides a car park management solution that can be operated with or without barriers. Drivers have the option to 'pay-on-arrival', 'pay-on departure' or – for registered users – 'drive-in/drive-out'.

Parking enforcement can be fully automated with varying levels of severity.

Parking payment solutions provider Parkeon is launching its own phone parking, called Whoosh!, in the UK.

The Company sees mobile phone parking systems as complementing the physical technologies, such as Pay & Display and Pay-on-Foot.

The development of Whoosh! gives Parkeon the ability to both compete head-to-head with phone parking companies and also complement its existing installed base of payment terminals.

"We announced our plan to add this method to our portfolio of payment services towards the of end of 2011", says Danny Hassett, Parkeon's parking director UK & Ireland. "As an integrated solution, designed to function alongside all our other means of payment, we have to get it right. We have, therefore, taken our time in bringing it to market."

Hassett said that as development work on Whoosh! is now virtually complete it is about to commence final trials.

The Company still believes there is a strong case for physical payment terminals. "Parkeon has continuously advocated that drivers should be offered a range of methods to pay for their parking", says Hassett. "This is essential if parking operators are to be fully inclusive of all customers and consider what is most convenient for them. Providing alternative payment methods also ensures that revenue streams are maintained and customers are not inconvenienced or penalised should there be a problem, such as the recent failure of the O2 network."