Welcome
Memphis International recently awarded a contract to Scheidt & Bachmann to replace the existing PARCS system. The overall design of the PARCS was a collaborative effort between the Airport and Scheidt & Bachmann.

Memphis International Airport is home to the FedEx Express global SuperHub, which processes a significant portion of the freight carrier's packages. Nonstop FedEx destinations from Memphis include scores of cities across the continental U.S. including Anchorage and Honolulu, as well as numerous Canadian, Mexican, and Caribbean cities. Intercontinental service includes Paris, London, Dubai, Frankfurt, Sao Paulo, Shanghai, and Tokyo. From 1993 to 2009, Memphis had the largest cargo operations by volume of any airport worldwide.

Scheidt & Bachmann has also been awarded the contract to replace the existing PARCS system at Charlotte Douglas International Airport.

Similar to the design process used at Memphis, the overall design of the PARCS was a collaborative effort put forth between the Airport and Scheidt & Bachmann.

The Charlotte Douglas International Airport, with approximately 26,700 parking spaces, is ranked 7th in the US in operations and 11th in passenger traffic with over 38,000,000 passengers annually. In April 2007, Charlotte was the fastest growing airport in the US and is among the 30 busiest airports in the world in terms of passenger volume. 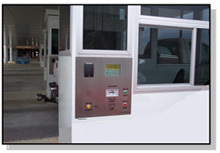 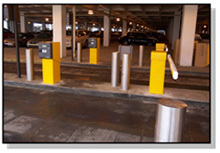