Colin explains “We are very serious when it comes to equipping our Officers with the latest technology to combat traffic violations and to assist them to fulfil their job. Even back as far as 2002, the CEOs had been equipped with Casio hand held devices that held an integrated camera – cutting edge technology at the time. These were replaced in 2005 with a competitor’s wireless technology model, but the promised integrated camera never materialised, so when the kit became obsolete with units failing out of warranty, we relished the chance to see what was now available on the market.”

Southampton City Council has been working with leading parking enforcement providers, Spur, a Xerox company, since 2004 when they were instrumental in supplying the City’s Permit Parking and debt management system. Since then, the council adopted Spur’s Si-Dem back office processing system to annually assist issuance of 33,000 Penalty Charge Notices (PCNs) and payment of fines and permits. One of the key requirements of the new solution would be the ability to link photographic evidence directly to the back office Si-Dem, providing the ability to display pictures of the contravention and allow payment to be made quickly and easily online with all the evidence available.

Requirements were scoped, these included integrated cameras; long-lasting battery; ergonomically friendly and robust units; wireless download technology to Si-Dem; and upgrade ability to include GPRS/GPS and future barcode/scanner capability. The search was narrowed to two options; a Motorola model and a Casio DT-X30, both of which Spur sourced for a 2 month internal trial. At the same time, Colin and the team embarked on contacting other Local Authorities that had used both models to gain their feedback. 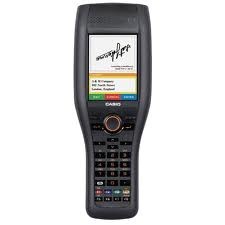 The results and feedback were unanimous. The Casio DX-T30 was the firm favourite, both in terms of usability and interface to the Spur software. The DT-X30 was chosen for its overall design, the IP67 water-proof rating, 1.8 metre drop test, large clear screen and recognised reliability and positioning within car park enforcement. The order for 40 units was placed in January 2011, and the training of team leaders took less than an hour. Over a year down the line of successful operation, SCC feel well placed to comment objectively on the Casio DT-X30 adoption.

From a process management perspective, the Casio DT-X30 integrates seamlessly with the Si-Dem software. Each is pre-loaded with Spur’s Si-Log handheld noticing issuing software for delivering parking tickets and notices whilst work flowing an evidence capturing process prior to printing the parking ticket via wireless Bluetooth printing technology. The interface to the Si-Dem add-on case management system has had a direct positive effect on prompt payment of PCNs with around 40% being settled immediately when faced online with the evidence capture. Indeed, Capita, SCC’s nominated IT & Customer Service frontline provider, report a significant decrease and reduced workload now all the CEO notes, sketches and high definition photos are available and transferred via wireless connection. The quality of the integrated camera, capturing sharp 2 mega pixel, crisp and consistent images, backed with with autofocus and flash for darker conditions is of equal importance. Battery life is also critical. SCC’s CEO’s operate in a 4 day shift pattern, with no time or facility available to boost power on shift and even through constant usage in the busier summer months, the Casio DT-X30 provides a reliable 12 hours between battery charges.

From an officer usage perspective, feedback on the ergonomic design is impressive – important when you consider the units are carried and used by hand for 10.5 hours each shift. Officers report that they are well balanced, robust and rugged (withstanding drops onto concrete pavement); well protected for adverse weather conditions (rain or extreme heat) and although slightly heavier than previous units, are still easier and more comfortable to grip within the hand. The LCD screen is an 8.89cm transflective colour touch screen that remains readable even in glaring sunlight. The capture process is streamlined with drop down lists, automated print out of PCNs and clear image capture. Back at base, the Spur’s Si-Dem notice processing software fully automates the backend administration process; from creation of follow up reminder notices, to communications with other external parties. For the future, the team at SCC are looking at integrating the barcode scanner option to provide Advanced Number Plate Recognition (ANPR) that will ultimately speed up the process of manual entry of each number plate. Running on the Casio DT-X30, the ANPR software will facilitate a simple ‘point and click’ at a row of vehicles to identify and match parking duration with ticket or resident permit validity, thus saving valuable time and decreasing the health and safety exposure to officers operating within traffic environments.

Colin Chapman explains, “Adoption of the Casio DT-X30 has been the right decision for Southampton City Council. We applaud the way that throughout each and every shift, it provides the robust, rugged support that our Officers need and we have been able to decrease the time to settle PCNs and at the same time, deter further offences that hamper the majority of paying public and keep the streets of Southampton free from obstruction and congestion.”