It had been almost two decades since I last visited Southland Printing Co. Its Co-Founder, John A. Manno Sr., was at the helm and became PT’s first customer. His company has never missed an issue since. When PT Advertising Director Marcy Sparrow and I arrived in Shreveport, LA, I hardly knew what to expect. It’s said that the more things change, the more they stay the same. John A. Manno Jr. has been handed the reins and is now President of Southland Printing. John Sr. still plays an integral role as Chairman of the Board and receives daily updates from his wife and Co-Founder, Angelina Manno, and John Jr., because he was recovering from an illness. The printing plant has grown from a couple of buildings cobbled together on Shreveport’s Airport Drive, to more than 150,000 square feet in seven buildings on five city blocks. But the feel of the place is the same.

I was struck 20 years ago with its cleanliness. There were carpets on the floor in the printing areas. I had grown up in printing plants and had never seen anything like that. There also is a feel that permeates the staff: It seems that the 70-plus employees are family. Southland today is a modern complex that has gone to the length of painting the floors with the same coating that is used on automobile showrooms; the place literally sparkles. The few presses I saw in 1996 have grown to more than a dozen flexographic machines, computer-driven, high-tech. The company’s administrative areas are the result of three adjacent buildings being renovated and modernized. Hallways lead to offices and then on to bullpen-style areas where sales and administrative staff take the time to introduce themselves and chat with visitors. We are truly in the South, and hospitality is everywhere. 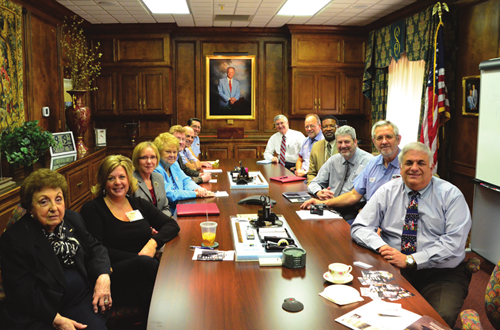 Technology and People Combine To Make a Successful Company

I asked Della Copp, Sales and Marketing Director for the past eight months, how long it took her to find her way around the warren of cubicles, offices and buildings. She smiled and said, “Months.” Everywhere the walls are covered with awards, photos and history of this company. The Mannos’ generosity to local charities and participation in Shreveport events is apparent everywhere. In one area seen on our visit, they had turned a large room into a winter wonderland with miniature villages and Christmas themes. Children from local hospitals and schools are brought in to see the wonders. Our tour began in Southland’s conference room, which rivals any in a Fortune 100 company. Memorabilia, including the first press that John Sr. used to produce hangtags, is on display. The senior staff is present, including Angelina Manno, company Secretary and Treasurer. Southern manners were in place as the company staff deferred to Mrs. Manno.

As the managers introduced themselves and their length of time with the company (a quick average was more than 30 years each, with some topping 40), one begins to realize that there is a lot of experience here, but also an understanding that there is a future and technology is necessary to compete. “We know that to grow we have to reach out to the marketplace,” said John Jr. “This past year, we did a few trade shows; this [coming] year we are doing 14.” “We have reorganized our sales teams,” Copp added. “We have our traditional inside sales staff, but are also sending staff out for sales efforts around the country. Customers should be looking forward to seeing Southland representatives calling in person in the coming months. We have a great story to tell.” As General Manager Olen Ashby Jr. took us on our tour, through administration, sales and marketing, prepress, the pressrooms, the paperconverting area, storage, maintenance, carpentry and shipping, one thought came to mind.

There is a tremendous amount of respect for the technology that the staff uses to produce the tens of millions of tickets a month that Southland ships worldwide. Maintenance schedules are strict, and unscheduled downtime is minimized. “We are committed to consistent, reliable delivery,“ Ashby said. “When an operator takes over a location, they need tickets right away. We keep standard tickets on the shelf so we can ship overnight. Tickets preprinted with logos come a few days later.” As we spoke to Robert Bryant, the Web Offset Pressroom/Warehouse Manager, and Flexo Pressroom Manager Robert Saucedo, there was no question that they knew about the issues their customers had, and why tickets had to be manufactured to a specific tolerance. “We covert the tickets to a .003 tolerance,” said Saucedo, talking about the width of the tickets his machines produce. “That means fewer jams, less downtime. It’s less than the width of a human hair,” he added, proudly. “We have records back at least eight years, with additional samples and records, some dating back to the company’s founding, located in a separate 5,000-square-foot building,” Ashby told us as we passed rooms filled with filing cabinets. “We have converted to online processes, including our administration and prepress, but having the original documents and samples is critical.” Much of the equipment used at Southland is built in-house.

A complete machine shop with drill presses, lathes and press brakes enables the staff to create new equipment when needed, and quickly react to an unanticipated problem. “Often, our staff come up with ideas to make the process run smoother, and we can create it on-site,” said Brad Cooper, Maintenance Manager. Our tour ended with a lunch for all the company staff. Good Southern cooking. They asked me to hold forth on the industry. I told them that technology was moving on, but the need for all types of tickets would be around for many years to come. Those companies that provide quality, service and dependability would do well. Southland has a rich history, but it also as its new tagline, which says, “An exciting future.” Things have changed over the past two decades at Southland, but John A. Manno Sr.’s commitment to detail and vision for excellence has remained. Technology is necessary, but people are what make a company great.