The retail outlets located on Tulketh Street underwent an impressive re-development along with the 12,000m² multi-story car park. The car park had not been used for over a year due to the excessive damage to some of the decks. The renovation areas included an internal deck, an area over occupied premises and the exposed top deck.

April 2016 saw the start of an impressive new retail development in Southport town center, along with the renovation of the adjacent 12,000² multi-story car park, which included an internal deck over occupied premises and an exposed top deck. Located on Tulketh Street amongst other small retail businesses, the building had remained unused for almost 12 months and had previously been home to a variety of supermarkets. The multi-million-pound investment from Sports Direct saw the creation of four units within the existing ground floor of the building, including three retail stores and a state-of-the-art gym.

Due to their experience and knowledge of car park construction, coupled with unsurpassed levels of performance, Triflex were chosen to waterproof, surface and protect the multi-story car park which lies directly above the store. Working collaboratively with contractor VolkerLaser, Triflex performed extensive on-site testing to establish the various requirements for each level, the condition of the existing substrate to establish which Triflex waterproofing and surfacing systems were needed to deliver the ideal solution. 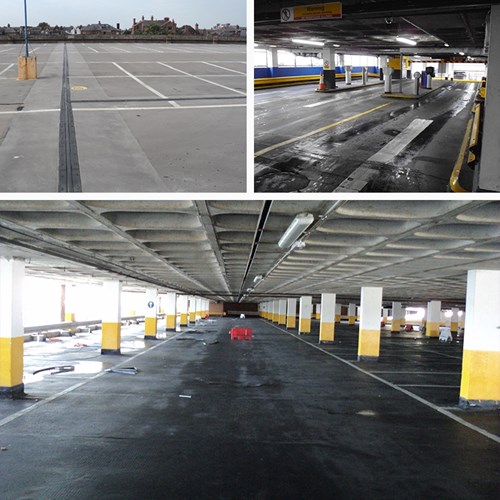 This testing revealed several different issues. There was extensive damage which included severe cracking, blistering and indentations of the existing asphalt. There was significant ponding in areas of the car park and contamination from oil, particularly on the internal deck. The existing substrate was so worn down in some areas that the aggregate underneath was beginning to show through, causing a potential slip hazard.

Triflex performed core testing which revealed the asphalt substrate of the first level of the multi-story car park had suffered extensive damage, particularly in one area where there had previously been a bakery directly underneath. The heat created from the bakery below penetrated the roof above causing condensation in the structure, causing the structural topping of the car park to deteriorate and collapse. Once the asphalt and Lytag screed had been removed and a new screed laid, Triflex ProPark was then installed. 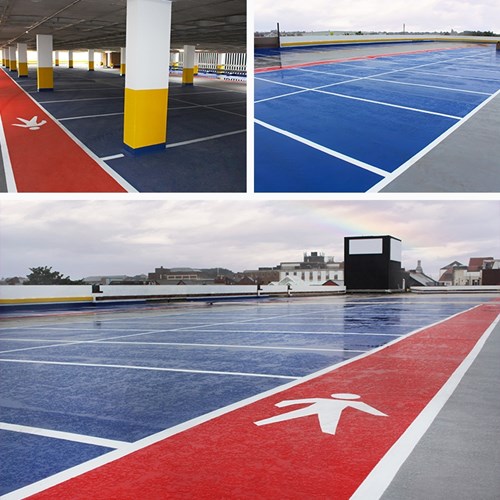 Designed for car park decks and ramps over occupied premises and high-risk decks and ramps that are subject to high levels of structural movement, Triflex ProPark is a heavy-duty BBA and EN1504-2 certified system, that has an excellent track record and offers maximum protection.

Triflex is the leading European specialist in liquid waterproofing products and cold plastics. Our

high-quality systems provide reliable and lasting solutions for waterproofing roofs, balconies, and parking decks. In addition, we prove our technology leadership time and again with a whole range of special solutions. Triflex markings set the standard on roads and cycle paths, in factories and multi-story car parks.
We deliver individual solutions worldwide from our production facilities in Minden, Germany. We can boast more than 40 years of experience in the market. Reliability, focus on service and innovation are the values we work by every day in our customers’ interest.