The evidence of a back to the city movement is everywhere, especially since the end of the recent recession. Due to space constraints in cities, development of high rise hotels and condominiums has meant a vast increase in underground parking garages. Now a new ventilation concept for garages that lowers the required parking garage height by about 4 feet has made its way from Europe, where it is used for fire and life safety. This innovative concept can increase the number of parking spaces, reduce construction, installation and running costs, as well as improve air quality.

There are many challenges to maintaining good air quality in enclosed or underground parking garages and most are under-ventilated. Since they are often designed with low ceiling heights, it is difficult to maintain clearances between the ceiling and cars and trucks.

Most U.S. underground parking garages use a traditional ducted approach for ventilation, with fresh air levels based on a given number of air changes per hour. They usually use supply and exhaust fans with air distribution provided by ductwork; air is extracted through the ducts and the air supply is uncontrolled, resulting in poor pollution control.

What’s more, the ventilation system is run constantly, even during extended periods of low (or no) traffic or ventilation requirements, resulting in high day to day running costs. In addition, ducted systems usually do not provide fire or smoke isolation capability. Only about 50 percent of the ducts extract smoke at high levels.

Figure 1 shows an example of the traditional ducted system. The photo on the left shows the overall layout, while the one on the right reveals the typical fate of vents in a ducted system.

A new concept has been developed that replaces distribution ducting with a number of small ceiling-mounted impulse fans. Two alternative options are available – the Jet Thrust fan and the Induction Thrust fan. This system has been widely used in Europe, and was brought to the U.S. by Howden American Fan Company. Figure 2 shows the Jet Thrust fan option; note the clean and uncluttered appearance of the ceiling without the distribution ducting. 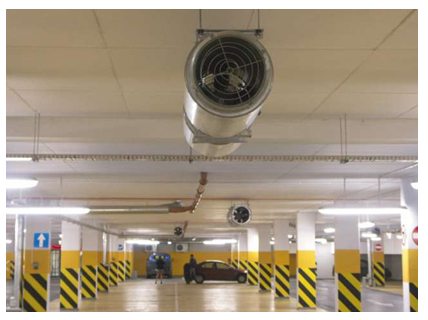 The basic principle of this ventilation system is that it uses Jet Thrust fan technology, together with the main supply and exhaust fans, and is thus capable of eliminating most of the problems associated with conventional ducted systems. The fans are properly positioned within the parking garage to control the distribution of the air within the structure. They can be used to create a flow of air at both high and low levels within the facility, resulting in a more efficient use of air than the conventional ducted systems. Jet Thrust units in the system act in a similar way to the traditional ducted systems, pulling air into the fan inlet (i.e., a grille/louver) and discharging at a high level towards the exhaust locations (i.e., a duct/louver/fan).

The Jet Thrust fan option features small ceiling-mounted UL-certified units, with silencers, hangers, and deflectors. The smallest fan has an inner dimension (ID) of 12 inches and the largest has an ID of 16 inches. The Jet Thrust fan is rated to UL 705 temp (500°F for 4 hours). Since the NFPA standard for tunnel ventilation is 482°F for an hour, the fan exceeds the NFPA standard.

The Jet Thrust option can provide 10 air changes an hour, double most ducted systems, making it ideal for smoke evacuation applications. These fans are reversible, which allows fire department personnel easy access to the fire source, and also lets patrons clearly view the exits. While this feature is currently not required in most U.S. jurisdictions, it is extremely popular in Europe and the Middle East where fire safety systems for underground parking garages are mandatory.

Both types are controlled by a carbon monoxide (CO) sensor; when the sensor indicates the presence of pollutants, the fans are activated only as needed to meet required pollution thresholds. They push the air to an exhaust port, fan, louver, or ramp. The system can be zoned, so all fans do not have to operate at the same time.

CFD analysis is the key to success

The fans are placed in their optimum location based on computer fluid dynamics (CFD) modeling. Engineers begin by creating a three dimensional computer model of the parking garage layout. The customer verifies the overall dimensions and general layout. Then a detailed analysis is performed; the model is first run with only the main (extract and supply) fans operating to note any pockets of stagnant air. This identifies the main bulk airflow paths from the supply to the extract points and any areas of re-circulation within the car park.

Then, Jet/Induction Thrust fans are added to the model and positioned to distribute the airflow to all areas of the garage, ensuring removal of any stagnant areas of air. Several iterations of the model may be run to get the optimum configuration with the best airflow through the system. A detailed report of the results is produced for each project with air speed plots, velocity profiles, and even particle animation videos.

Figure 4 illustrates the modeling of the system’s overall air movement using the Jet Thrust fan option. In this instance, supply air comes in from the ramp. The red indicates high velocity of the air being pushed through and extracted, eliminating pockets of stagnant air. The system manipulates air from supply through extraction. 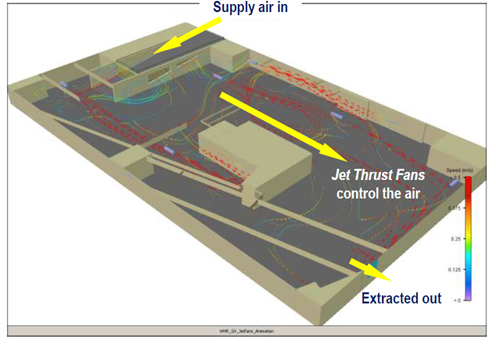 In Figure 5 we see an illustration of low level air entrainment as modeled using CFD. The white rectangle represents a Jet Thrust fan; note the high velocity (red) air that diffuses the farther it flows. The air is picked up by the next fan until all that air is pushed through a port hole.

Figure 6 shows an example of the iterative CFD analysis process. On the left, the areas circled in red indicate dead spots where air is stagnant. On the right, after the Jet Thrust fan is added, the dead spots have been almost totally eliminated. 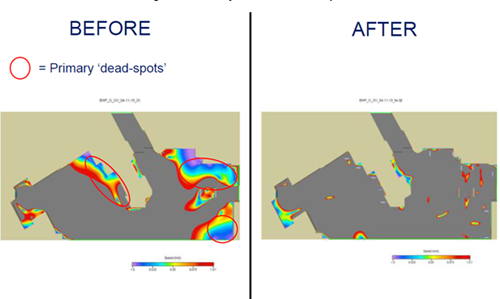 The new underground parking garage ventilation system includes a control system that links all components, including the supply, exhaust, and thrust fans, the carbon monoxide (CO) sensors, and the variable frequency drives (VFDs). Multiple fans can be controlled by one VFD, for example, there might be one VFD for each garage level. VFDs and CO sensors are zoned, and the fans do not have to operate 24/7. Table 1 shows how the system operates in various ventilation modes. 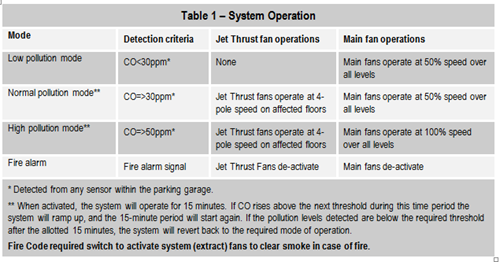 The Jet Thrust system has a number of benefits. In addition to its cleaner, lighter appearance, the system optimizes parking garage use, providing more parking spaces, which in turn increases revenue. Because the system does not require clearance for duct work, it can lower the required parking garage height by about 4 feet, reducing excavation and cement costs and lowering overall construction costs. Costs for installing ductwork are eliminated and other installation costs are also lower because there is no more need to route around ducts. The system also improves system performance due to better air distribution, and it reduces external noise levels since lower powered extract fans are used. Operational running costs are also reduced.

More than 140 systems have been installed in underground parking garages worldwide, including a shopping center in Walnut Creek, CA; a creative campus in West Los Angeles, CA; a retail, restaurant and mixed-use space in Honolulu, HI; as well as a project in Washington, DC.