Worcester Polytechnic Institute is already home to the first green roof in Worcester; now the university plans to open the first "rooftop field" in the city.

Later this summer, WPI will officially open its stunningand sustainableSports and Recreation Center. In May the university will break ground for a $20 million, 534-car parking garage with rooftop athletic fields for softball, soccer, field hockey, lacrosse, rugby, and a variety of other recreational activities. Approval from the City of Worcester is expected in April; the new facility is projected to open in January 2013.

"This parking facility will contribute further to the greening of the WPI campus, as it will allow removal of most of the parking spaces from the quad and the West Street entrance," said WPI President and CEO Dennis Berkey. "Given that the baseball and softball fields are already at a lower elevation than Park Avenue, this single layer of parking will not be visibly obtrusive. We will restore the playing fields on top of the roof deck, almost at street level at the east end. Adjacency to the new sports and recreation center will provide easy access to plentiful parking for events, games, and conferences to be held in that new facility. As with the location of the sports and recreation center, there will be no loss of usable space on the campus."

At WPI, the rate of students participating in athletics has risen to 60 percent in recent years. The success of the WPI varsity athletic program has also risen, with WPI winning the Worcester College Cup for the top-performing athletic program among its local peers in six of the past eight years, and enjoying a 20-percent increase overall in winning percentage. In addition to supporting athletic events, the new garage will also offer ample parking for the growing number of large-scale events on campus, such as robotics competitions, admissions open houses, career fairs, and alumni events.

The new facility will cover the entire site of the current softball and former baseball fields. The one-story structure will feature a synthetic turf field, a brick façade, and fencing and netting to contain stray balls. Portable bleachers will accommodate up to 300 spectators, and field lighting will allow for evening competitions. The garage will also include a concession stand, locker rooms for visiting teams, and storage facilities. It will provide parking for WPI faculty and staff, as well as visitors to the campus.

The new facility will be built next to the Sports and Recreation Center and Harrington Auditorium at the hillside located at the west end of the WPI Quadrangle. Because of the varying elevation of Park Avenue, which peaks between Institute Road and Salisbury Street, the south end of the building (closest to the running track) will be approximately level with Park Avenue, while the north end of the building (facing Salisbury Street) will be one story above the street. 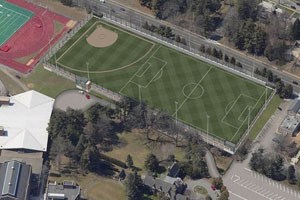 The garage and fields will be interconnected with stairs and an elevator. The university will facilitate pedestrian access to and from the campus quad through a covered stairway between the Recreation Center and Harrington Auditorium. Drivers will enter the garage from either Salisbury Street or Park Avenue, via new access roads.

In 2007 WPI's Board of Trustees endorsed a policy calling for the design of all future buildings on campus to meet LEED (Leadership in Energy and Environmental Design) certification standards from the U.S. Green Building Council (USGBC), a national organization that certifies buildings that are green and sustainable, and protect the environment. In 2008 WPI opened its environmentally conscious, LEED-Gold-certified residence hall, East Hall, which features the city of Worcester's first "living green" roof. Prior to that, WPI's Bartlett Center, the university's admissions and financial aid building, which opened in 2006, was the first university building in Worcester to attain LEED certification. The Sports and Recreation Center, currently under construction, is expected to be awarded LEED-Silver designation.

Although parking garages are no longer eligible for LEED certification, this new facility will be a sustainable building with features such as stormwater management, energy efficiency, an electric vehicle charging station, and the use of materials with recycled content; the very nature of the project is an important sustainable statement in that the land is being used for two purposes under one footprint. The project is currently being designed by a team including Symmes Maini McKee Architects (who completed a similar facility at Providence College), JJA Sports, VHB Engineering, and Gilbane Building Company.