Electric cars might seem like a recent phenomenon, but they go back far further than you might think. We look at the industry, from the first EV to the present day.

Electric car sales are booming, with every major manufacturer in the market - and increasing numbers of smaller brands too - committing seriously to EVs. There are cost benefits for buyers, but the real push for manufacturers is the environmental benefits on offer for both the brands and the drivers.

The first mass-market electric car to arrive in the UK was Nissan’s Leaf in 2011, but that is by no means the beginning of the story for electric cars. Instead, we need to go back essentially to the birth of the car itself.

We have to go back to the time when we’re not sure whether an invented vehicle is a car, a horseless carriage, or something else entirely. Karl Benz is widely credited with the invention of the first practical car in 1885 with the Benz Patent-Motorwagen. However, inventors had been fettling with the idea of ditching the horse as a means of personal propulsion for many years before that.

Sometime in the 1830s - possibly as early as 1832 - Scottish inventor Robert Anderson created an electrically-powered carriage, with non-rechargable electric cells, which tends to be classified as a horseless carriage. It was an important step in the development of cars in general however, and its interesting to note that electric power was the chosen propulsion method.

A little later, Gaston Planté developed the lead-acid storage battery in 1859, as electric vehicles were being developed, including a train powered by a DC electric motor.

Things were trickling along however until 1884 when things really stepped up a gear. The reason os two-fold. Thomas Parker built the first production electric car in London, using rechargeable batteries. And a few years later, William Morrison developed an electric wagon in the United States which proved very popular. The touch paper was well and truly lit. 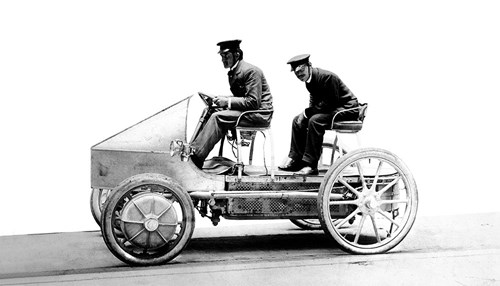 With early cars not capable of travelling long distances regardless of powertrain, and journeys typically short unless travelling by train, electric cars made sense in a similar manner as they do today.

The electric motor was clean, responsive, and reliable, and internal combustion engines at the time were none of those things. As such, electric car development initially outstripped that of cars with engines - which seems remarkable considering the history we are all aware of.

New York taxi drivers loved them, and in 1897, the first electric taxis were used on the streets of the US city, with 60 cabs eventually making up a fleet of EVs.

At the turn of the century, electric cars accounted for a third of all vehicles on US roads for the first dozen years from 1900 onwards. And this enthusiasm brought famous developers - again a parallel with the current situation - though for Elon Musk now, read Thomas Edison around 100 years ago.

If famous American inventors were fascinated with the technology stateside, Europe saw a fascination with EVs with veritable automotive royalty. Ferdinand Porsche created the Egger-Lohner C.2 Phaeton in 1898, driven by hub-mounted electric motors - which is a direction that manufacturers are taking EVs in the coming years.

Porsche went further, by developing the electric hub motor, and then supplementing it with an engine, to create the first hybrid in 1900 with the Lohner-Porsche Mixte. If you thought Porsche took its time coming to the EV game with the class-leading Taycan, think again.

Essentially, electric cars were being developed at pace, and with some very clever minds behind them.

The rise of ICE 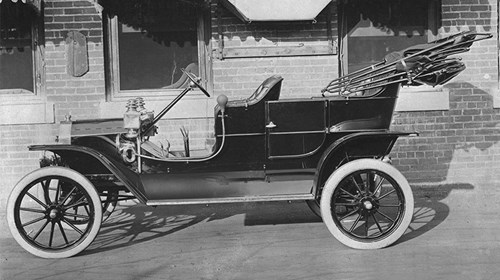 What halted development of the electric car was the rise of the internal combustion engine (ICE). That, and the combination of the Ford Model T meant that mass-produced petrol cars were cheaper, easier to refuel, and travelled longer distances.

Within 20 years of its release, more than 15 million Model T cars had been sold, quickly making economies of scale and access to motor vehicles easier than ever.

As such, the race was on to develop better and better ICE cars, with only a handful of interesting asides peppered throughout the next 100 years or so. The Moon Rover was a rare example, since internal combustion engines struggle to be anything other than a lump of metal in space. Oh, and less interesting asides, like the milk float. 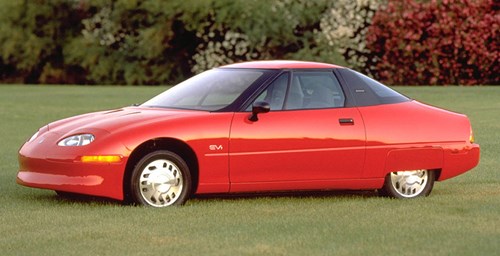 Other than a handful of experiments with electric cars from the likes of VW, BMW, and others, electric cars weren’t given any real attention until General Motors released the EV1 in 1996. It was designed to be mass-produced, and built from the ground up to be electric, released under a leasing programme with a little over 1,000 models produced. However, GM decided to crush all of the models when it closed the EV1 programme down, despite protestations from the public, with only a handful surviving.

After that false start, it came down to the Nissan Leaf to properly start the rEVolution. Introduced at the very end of 2010 in Japan and the US, and 2011 in Europe and other markets, the Leaf was the first true mass-market electric car.

Shortly before the Leaf, Tesla brought along its Roadster, selling in around 30 countries eventually, but starting out in 2008, using a Lotus chassis as a platform for its sports car.

BMW revealed its futuristic i3 in 2011 and brought it into production in 2013, and the Renault Zoe went into production in 2012. There are other small-scale models like the Tesla Roadster that came earlier, including Mitsubishi’s I-MiEV, but it was the combination of Leaf, i3, and Zoe that really set a foundation for EVs to prove a success around the world, along with the Roadster’s popularity enabling Tesla to develop the Model S for 2012.

The rest is history 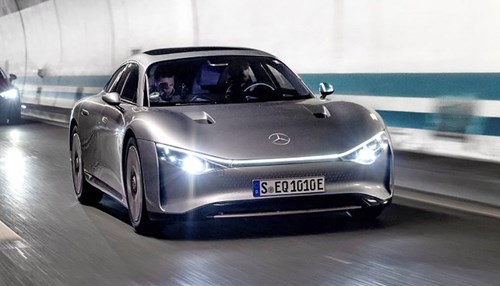 Now, we are in the situation where electric cars are being developed at pace, with production models available to buy that can cover almost 400 miles on a charge, and recharge in less than an hour. It’s a long way from the beginnings more than a century ago.

Starting from the simple belief that parking could – and should – be easier, YourParkingSpace has been striving to make parking better since its foundation in 2013.

Our aim is for YourParkingSpace to be the online business that springs to mind next time you want to park your car. The YourParkingSpace platform connects drivers with over 350,000 privately owned and commercially operated parking spaces across the UK, available to book hourly, daily, or monthly basis. Drivers can book parking on-demand through our website and mobile applications.