As more and more people got cars, the need for a place to park it was growing bigger and bigger. Parking became a problem and cities were looking for a solution to park as many cars as possible on as little space as possible.

The first cars weren’t as weather-resistant as today’s cars. Back in the days they had open tops, leather seats and were remarkably sensitive. Therefore, they had to be parked inside where they were safe from the cold, the rain and other bad weather conditions. The first parking garages looked like other buildings where people would store stuff. A car was by most people considered as a machine and nothing more than just a machine, in contrast with today’s idea of cars. The parking garages blended in with the neighborhood; you couldn’t really tell that they were places to store cars. Sometimes parking garages were horse stables, where they would charge the same for parking a car as they did for stalling a horse. 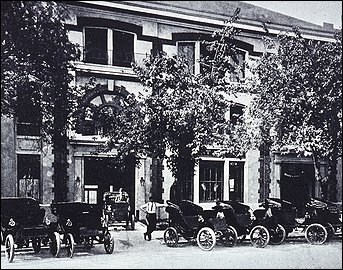 The early parking garages were staffed with parking attendees. You didn’t drive your car inside and to the parking space yourself. You would drive up to the garage, hand over your car to the parking attendant and he would take care of the rest. The car was placed on a platform and with car lifts and turn tables, the car would automatically be moved to an available parking space. In the 1920’s there were different designs drawn up for car lifts to move cars from one parking deck to another. One of these designs was called the “Double Helix” because it had two spiral ramps to move the cars in the structure. These mechanical garages were forerunners of the automated parking systems of today. But this type of parking garage didn’t have one thing: the freedom to park your car yourself and to enter and exit whenever you want.

The parking garages with ramps to move from one floor to the other, made it possible to park your car yourself. It was a challenge to build the ramps: They couldn’t be too long because than you would lose parking space, but it couldn’t be too short and steep either because otherwise cars wouldn’t be able to drive up the ramps. This type of parking garage did come with a downside: less cars could be parked in the same amount of space in contrast to a mechanical garage because the ramps took more space. This meant that garages got bigger, in order to have enough capacity. The parking garages with ramps is the one that replaced the automatic parking garages. Even with all the disadvantages of the ramps, the ability to park your car yourself was more important to people. Having to turn your car over to an attendant and then having to wait in line at the end of the day for your car to appear again was considered inconvenient.