As congestion on our city streets continues to worsen, municipalities are looking for inventive new solutions to combat this growing problem. One such method currently gaining traction is ‘parklets’; small oases of green space or street furniture that can be installed into a single parking space. But how might this change driver behavior and what will the impact be on the parking industry?

Much of the blame for traffic is attributed to parking, in fact, it is estimated that 30% of traffic is searching for a space to park in. Of course, inner-city traffic poses numerous problems; chief among them being air pollution which poses a risk to human health and endangers the future of our planet.

As awareness of the climate crisis grows, municipalities find themselves under increasing pressure to tackle congestion and the emissions it creates. Solutions such as park and ride facilities, which remove vehicles from inner-city streets, and parking guidance and parking apps, that reduce vehicle search time, offer municipalities the opportunity to work with and adapt the parking industry. 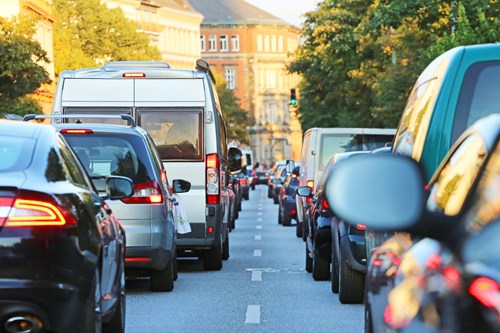 Meanwhile, micro-mobility solutions such as dockless bikes and e-scooters are providing a viable and popular alternative to car use. Whilst they may reduce emissions, these alternatives are challenging the way we use the curb and potentially threatening traditional parking. And, bikes and scooters are not the only innovation vying for space on the curbside. Cities around the world are becoming even more radical in their approach to the curb, as they transform on-street spaces into mini-parks, doing away with parking spaces altogether.

These parklets are semi-permanent, moveable on-street mini-parks that can be positioned along the curbside to extend the sidewalk. Typically they feature greenery and art installations or amenities for pedestrians and cyclists such as seating areas and bicycle parking. Parklets tend to be available to the public but they can also provide businesses with the opportunity to expand their footprint with outdoor seating. Since the first parklet popped up in San Francisco in 2005 they have spread across the United States and finally crossed the pond into the UK in 2015 when the first parklet was installed in London. Now cities across the UK are planning parklet initiatives, but what is the attraction?

Parklet Initiatives in the UK

Two UK cities planning to install parklets offer insight into what makes them so appealing to municipalities. Manchester and Bath are very different cities: Manchester is a major city in the north of the UK with a population of 547,000 whilst Bath, located in the south of England, has a population of around 90,000. A quick look at the skyline of the two cities reveals that they are quite different places: Bath is a small tourist city renowned for its Georgian architecture and Roman Baths whilst Manchester is a sprawling metropolis where modern architecture sits alongside imposing warehouses from the city’s industrial past.

For all their differences, both cities are keen to tackle their congestion problem whilst creating greener and more pedestrian-friendly spaces. The allure of parklets is clear; not only do they decrease the parking spaces in the city center (translating, with luck, to fewer cars attempting to park) they also inject community spaces into areas that may have become underused or neglected.

The city of Bath is a UNESCO World Heritage Site, and it is a beautiful place to visit (although I would say that as I worked for the tourism board for several years!) It is renowned for its magnificent Georgian architecture which plays a huge part in its UNESCO status. But of course, Georgian cities did not cater to cars. Sedan chairs or horse-drawn carriages were more the transport of the day! And, as so much of the city is protected from demolition or development it is difficult to adapt the streets to the amount of traffic now driving through this small city. 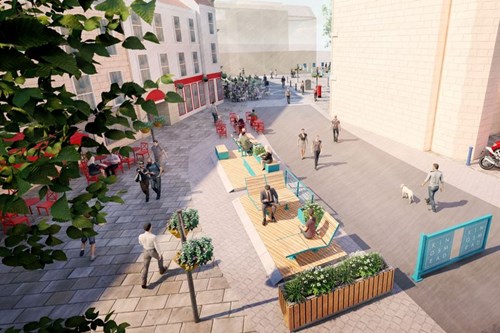 Bath’s situation in a valley exacerbates the pollution problem and so the council is looking into several solutions, including a Clean Air Zone where certain vehicles would be charged to enter the city. With three park and ride facilities, there are options to park outside the city, but garages in the center are still popular, as is on-street parking. And so the council is working with Vestre, a sustainable urban furniture provider, to change driver behavior to inner-city parking whilst bringing more green spaces to the city. The hope is that the effect of parklets will be double: creating a more pedestrian-friendly city whilst attempting to alleviate congestion and air pollution.

Meanwhile, parklets are being introduced across Greater Manchester as a means to create a more active community. The recent installation of a parklet in Stockport has been an overwhelming success with residents. With a bespoke mural, ping pong table, seating, planting, and bicycle parking, the parklet offers shoppers and residents a place to relax. 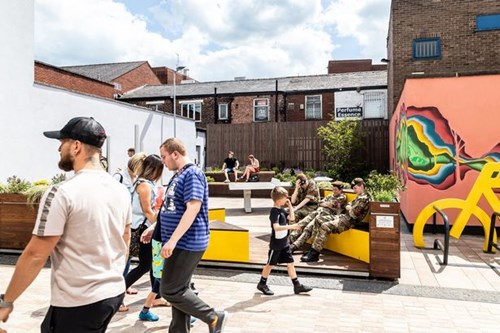 Following on from this success, residents of Greater Manchester have recommended 200 potential sites for parklets in a bid to create people-friendly streets that will nurture a closer community. In Levenshulme, a neighborhood of Manchester bridging the city center with the suburbs, a parklet initiative designed to reduce traffic and promote cycling and walking, has been honored with a national award. 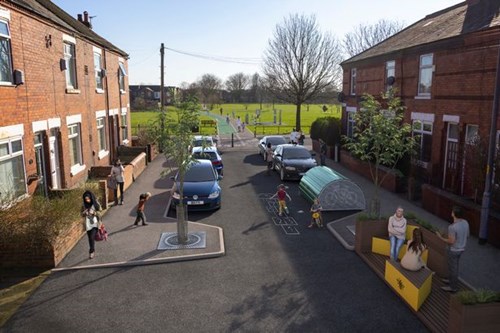 Possible Outcomes and Impact of the Parking Industry

There is no doubt that cities need to consider ways to reduce traffic-related emissions, and with their added benefit to the community, it seems as though parklets will play an important role in the future of our cities. However, the impact of parklets on the parking industry remains to be seen. Will they reduce the number of cars attempting to park in the city center or will they merely increase the amount of time cars search as more cars search for fewer spaces? And, as other methods of reducing emissions, such as electric vehicles, gain popularity, it may be troublesome to see so many parking spaces wiped from the city center.

Of course, time will tell whether this trend sticks. It could be that competition for the curb will see parklets ousted from our city centers, or new methods for reducing emissions could woo municipalities. In the meantime, if their popularity increases, the impact that parklets have on the parking industry should be monitored. But perhaps we can all benefit from a greener stroll along the sidewalk!