When designing industrial cameras, there are many factors to consider, from power consumption and weather resistance to the set of onboard features. However, there is one thing people often overlook despite being just as important as a camera having infrared lights: cables. Ideally, an industrial camera requires no more than a powering cable and a cable for data transmission. Due to their advanced but power-consuming features, many cameras require three, and sometimes even more cables to operate. And the more multi-cable cameras you have, the bigger the problem regarding cable raveling, device replacement, and overall maintenance.

Although industrial cameras operated by multiple cables are here to stay for a while, there are more and more compact devices intended for a specific use that cut the Gordian knot by uniting power and data transmission in a single cable. How is this achieved? The answer is PoE+.

PoE, or Power over Ethernet, is an umbrella term for any standard or ad hoc system where electric power and data are forwarded together via a twisted-pair Ethernet cabling. The single-cable technology for data and power transmission has been around for quite a while now. Plain old telephone service (POTS) used – and, in some areas, still uses – copper twisted pair wires to link those good old phones to the phone network and power stations. With the introduction of voice over IP (VoIP), it seemed logical to rethink that technology and use the power of PoE to create straightforward and economical IP telephones with the single-cable operation in mind.

However, there are many devices where PoE is not enough. Not because the technology isn’t there, but because PoE cannot transfer enough power through the cables. This is where PoE+ enters the picture. Whereas PoE uses the IEEE 802.3af standard, allowing it to deliver a maximum of 15.4W over Cat5 cables, the PoE+ wattage is up to 25.5W thanks to the much more sophisticated IEEE 802.3at standard. In practice, this means that PoE can power most wireless access points, simpler surveillance cameras, and the aforementioned IP phones. In contrast, PoE+ can be adapted to more complex devices, including video IP phones, wireless access points with six antennas, alarm systems, surveillance cameras that pan, tilt, or zoom, and certain automatic license plate recognition (ANPR) camera types. 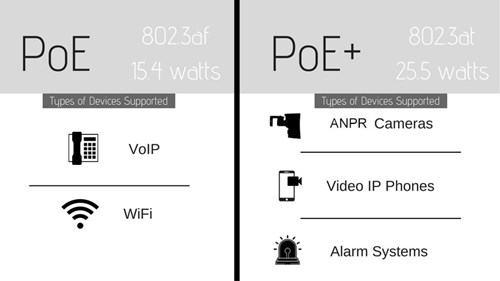 It’s worth adding that there is an even better standard: PoE++ or UPoE (universal power over Ethernet). It uses the IEEE 802.3bt standard, providing a wattage of 51W – or 71W if there are four twisted pairs. This enables PoE++ to power most modern TVs and laptops; in other words, devices that consume a lot of energy, especially when they are turned on. As such, PoE++ may be excessive in certain situations, such as an IP (surveillance) camera where the device could be in standby mode for most of the time.

Still, there may be cases – such as ANPR in high-density traffic situations – when not even PoE++ is enough due to high power consumption or heavy data traffic needs. This is why no matter how advanced PoE technology becomes, companies will continue manufacturing many industrial cameras for multi-cable operation.

That does not mean PoE+ cameras do not come with noticeable advantages, though.

PoE+ and IP Cameras: the Advantages

When it comes to IP cameras, especially models intended for parking and/or access control purposes, PoE+ is a blessing for multiple reasons.

The first one is obvious: a single cable can power the device and allow it to communicate with the system. Single-cable PoE+ cameras save money for installers. Firstly, it allows them to invest in more cameras with more sophisticated knowledge. And, simultaneously, they can prepare the system for PoE+ operation with the appropriate cable switches. Additionally, the single-cable operation makes it easier and quicker to remove PoE+ cameras from their initial place if you need them elsewhere. 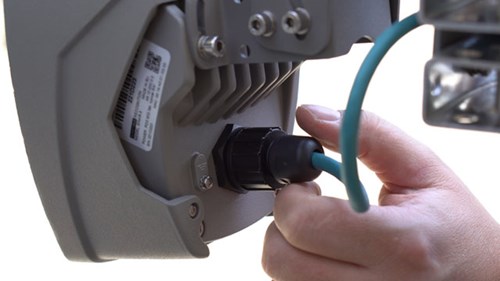 Aside from providing fewer installation costs, the simpler maintenance of PoE+ IP cameras is also a huge plus. In this regard, however, the boundaries between PoE, PoE+, and more basic IP cameras vanish; there is the option to maintain them from anywhere, provided that a stable internet connection is available. This means that if a camera’s initial setup is far from ideal, the maintenance group can tinker with the settings – and, optionally, switch off the device – without visiting the camera’s location.

PoE+ in the ANPR Camera Industry

Costs and limited space can be decisive factors in the installation of any camera system. It isn’t surprising that there are variants of more complex IP cameras supporting PoE or PoE+ technology. This is especially true for parking and access control cameras, where straightforwardness and easy operation are necessary. Adaptive Recognition designed Einar smart ANPR camera with that in mind.

Installing an Einar camera is a breeze; all it takes is unboxing the device, putting it into its indented place, and plugging in the PoE+ cable. Once the camera receives the signal, it’s just a matter of settings from the straightforward GUI to tailor Einar to specific needs. There is no need to worry about high power consumption either. Even when the built-in infrared lights are maxed out, Einar’s power consumption never exceeds 17W; that is way below the maximum threshold of PoE+. To top it all, Einar comes with onboard ANPR features. These features allow the camera to read and recognize license plates on the spot. Combine that with a compact but sturdy design meant to make the camera last for ages, and you get a reliable, single-cable device that saves time, money, and valuable resources for users.

In most cases, there is the option to choose between PoE+ devices or cameras with separate cables for powering and data transmission. However, there are situations where having those separate cables is out of the question. Think cameras used in patrol cars. It’s one thing that operating such a camera requires the full attention of a trained officer – while their partner drives. A bigger problem is that there is little to no space for carrying huge batteries in a patrol vehicle. This is especially problematic when the camera has to be placed behind the windshield. In short, the single-cable solution is a must for an effective ANPR on the move.

Thankfully, there are ANPR cameras that fulfill the above criteria, such as MicroCAM. Similar to Einar, MicroCAM withstands rapidly changing external conditions and it’s easy to install. This camera model is handy because it gets its power directly from a laptop. Thus, it allows its users to reduce the number of cables to operate MicroCAM to the absolute minimum. Not to mention that officers can immediately see the desired results on the connected laptop’s screen, even sending it back to the central database using a mobile internet connection.