This is a recent retrofit project completed on behalf of Bank Parking on Victoria Quays in Sheffield. They have used EFAFLEX car parking high-speed doors previously and chose the PS system once again due to its exceptional build quality, aesthetics, and opening speeds. This car park facility had a history of unwanted anti-social behavior and crime. The operators of the site wanted to improve the user experience by enhancing the security and adding various payment mechanisms.

The car park is located in an old stone block facade building where the entry point was a simple barrier that raised to allow access for the users. The client was looking for a solution where the door controls could integrate seamlessly with their existing parking management system. The EFATRONIC Controller was chosen for its flexibility, ease of configuration, and its seamless integration. 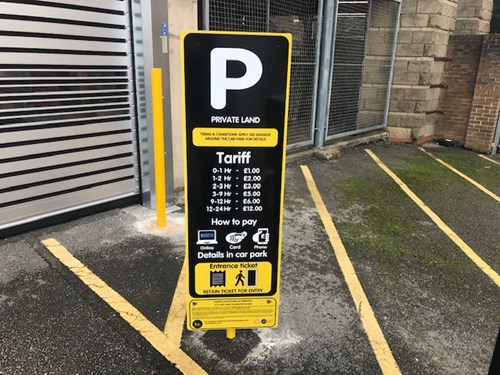 As part of the project, Bank Parking looked to enhance many aspects of the facility which included securing the site with 24-hour CCTV, improving the signage, and increasing the brightness of the lighting. Automatic Number Plate Recognition cameras were installed along with zero-touch payment machines and pay by phone option to give users additional payment methods.

Three PS high-speed spiral doors featured fabricated frames to facilitate the doors’ integration into the openings and to cater to the building’s bespoke shape. Doors were installed at both the entrance and exit points, which open on approach and close quickly behind the driver to improve user safety and security. These doors feature ventilation laths which are popular in the EFAFLEX car park doors and help ensure sufficient air movement within the car park. It’s a solution that has been specifically designed with this application in mind to allow free air movement while enhancing security.

Bank Parking are a Sheffield based organization with facilities across the UK. They pride themselves on being different. Their ‘Park and Give’ scheme has been operating since 2013 and they frequently contribute to local charities, as well as offering fair hourly, daily or contract tariffs.

The PS car park doors were the perfect solution as the round spiral design is ideal for high-volume traffic applications. They are fast, safe, secure and with superb aesthetics to enhance both the appearance and functionality.

EFAFLEX design, manufacturer, install and service high-speed doors for industrial and commercial applications. Founded in 1974, the company supplies to clients including food processing,  manufacturing, clean room, cold store and the chemical, pharmaceutical sectors. As the only manufacturer of high-speed industrial doors, EFAFLEX has been entered into the world market leader index and is one of the 461 top companies in Germany, Austria and Switzerland. The privately-owned company has more than 1,200 employees worldwide. With its headquarters in Bruckberg, Bavaria, EFAFLEX is firmly established as the largest employer in the region. Furthermore, with ten subsidiaries on five continents, the company is developing international markets with more than 50 percent of their revenue now being generated outside of Germany.