EFAFLEX have been designing industrial and commercial doors for nearly half a century. It’s all they do. Their world is doors, or infact their doors are now installed the world over! They have over 90 different models in their range, each designed with a specific application in mind but all engineered to help drive safety, improve performance and reduce energy costs.

The latest in the range has been introduced due to feedback from car park operators, and building facilities managers. With the increased risk of vandalism and rise in the number of burglaries, operators are keen to improve the level of security, particulalry at the points of entry and exit. Here we look at the details of one of their newest projects, that was completed in conjunction with their Australian partner DMF International Pty Limited.

The site was a busy car park facility in Sydney which featured a particularly low headroom clearance. Typical roller shutters have previously been a popular product for securing entrances, but being manual in operation are slow to open and close. They are heavy to use and don’t provide much in the way of insulation. Heating or climate control in chilled areas can literally seep from around their edges. For this project the client needed a door solution that would be speedy to operate and also capable of many opening cycles per day.

EFAFLEX had the ideal solution. The SST® PS N high-speed door was made bespoke for the aperture and featured a low lintel head assembly that requires less than 280 mm for the door blade when in the open position. During the site surey, the engineers noted the gradient of the ground and produced a stepped layout for each door, allowing for the full utilisation of the available floor area.

The EFAFLEX car parking system is becoming a popular choice for hotels, multi-storey car parks, commercial or industrial buildings and residential blocks. Its slim line construction makes it ideal for areas of reduced space and the adapted laths which measure 105 mm mean that the door can be installed in tight spaces. 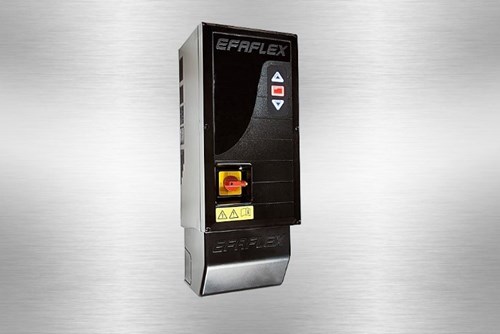 The PS is available in standard sizes available up to 6.1 meters wide by 4 meters in height and for this project was equipped with the new EFA-TRONIC® control box which is exclusive to EFAFLEX. Its compact design features a three bus system and USB interface. It is equipped serially with more than 20 inputs and protection class I/IP65. With the new EFA-TRONIC Door Controller, the client was able to interface the door with the existing system for added security and peace of mind.

The PS is uniquely fast. It opens at a rate of nearly 2 metres per second and capable of up to 200,000 operating cycles per year. Available with ventilation laths and offering exceptional insulation from noise, it’s easy to understand why not only Sydney but cities around the world are latching onto the plethora of safety and performance benefits the EFAFLEX range can deliver to car parks and garages users.

EFAFLEX design, manufacturer, install and service high-speed doors for industrial and commercial applications. Founded in 1974, the company supplies to clients including food processing,

manufacturing, clean room, cold store and the chemical, pharmaceutical sectors. As the only manufacturer of high-speed industrial doors, EFAFLEX has been entered into the world market leader index and is one of the 461 top companies in Germany, Austria and Switzerland. The privately owned company has more than 1,200 employees worldwide. With its headquarters in Bruckberg, Bavaria, EFAFLEX is firmly established as the largest employer in the region. Furthermore, with ten subsidiaries on five continents, the company is developing international markets with more than 50 percent of their revenue now being generated outside of Germany.