Where previously there were only barriers at the entrances and exits to the public car parks in Geneva, now in the “Plainpalais” high-speed doors from EFAFLEX seal off the parking areas against unauthorised access. The recently opened public car park with a total of 737 spaces was equipped with three high-speed doors and a folding door, which are controlled via the EFA-SmartConnect® module.

The FONDATION DES PARKINGS is the largest car park operator in the Geneva region and has set itself the goal of digitizing all processes. EFAFLEX Swiss meets the associated high demands on service providers and suppliers and sets standards in preventive maintenance of garage doors with EFA-SmartConnect®. 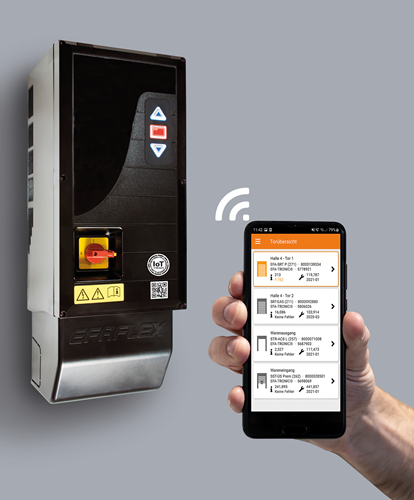 Christian Sommer, Service Manager at FONDATION DES PARKINGS, and his technical team take care of the 160 parking spaces that the company operates in the Geneva region. Dylen Marra, a technician in the team, looks after the “Plainpalais” car park and is full of enthusiasm. He describes EFA-SmartConnect® as a digital achievement.

With this IoT solution for networked doors and the associated user-friendly app, EFAFLEX enables central monitoring. The status of all doors is shown clearly and in real time. According to the principle of diagnosis - service - maintenance, faults can be prevented in good time and maintenance can be planned in advance. This minimises downtimes and lowers operating costs. 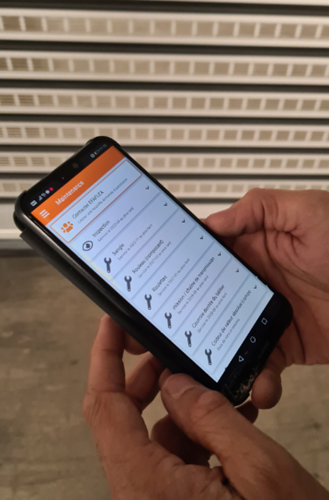 EFA-SmartConnect® also works extremely efficiently in the event of a malfunction: messages can be sent directly to EFAFLEX via the app. Thanks to fast transmission times, communication with the EFAFLEX service technicians is just a click away. This speeds up processes and reduces downtimes. The security of all data is guaranteed at all times.

EFA-SmartConnect® stores all relevant information in the local network. The user decides when to send which information to EFAFLEX. An exchange only takes place through the deliberate transmission of the data to the service. And this is also maximally secured: thanks to the use of modern end-to-end encryption, all information remains secure and confidential.

Dylen Marra draws his conclusion: “Thanks to EFA-SmartConnect® I can query the status of the wearing parts in real time and plan the next maintenance precisely and with foresight. In addition, in the event of a malfunction, I can transmit all the relevant data about the door, including the malfunction code, to the EFAFLEX service center with one click."

EFAFLEX design, manufacturer, install and service high-speed doors for industrial and commercial applications. Founded in 1974, the company supplies to clients including food processing,  manufacturing, clean room, cold store and the chemical, pharmaceutical sectors. As the only manufacturer of high-speed industrial doors, EFAFLEX has been entered into the world market leader index and is one of the 461 top companies in Germany, Austria and Switzerland. The privately-owned company has more than 1,200 employees worldwide. With its headquarters in Bruckberg, Bavaria, EFAFLEX is firmly established as the largest employer in the region. Furthermore, with ten subsidiaries on five continents, the company is developing international markets with more than 50 percent of their revenue now being generated outside of Germany.