The European standard EN 1991-1-1 defines safety-relevant parameters that are used in structural design, building construction, and engineering structures. Standards that are used in Europe are marked with the abbreviation EN.

Why Is That Important?

Standards are of great importance in general, they ensure innovative technologies and increase safety for society. They contribute to a better understanding, allow us to react faster, and act appropriately.

Who doesn't want to enjoy progress and safety in every situation?

How Do Standards Affect INTEGRA-pw and Its Use?

For all users of standards, these determine a uniform and identical framework for the calculation/determination of the loads due to different situations in the life of the structure - such as the construction phase, use phase, and extraordinary events through to dismantling.

The EN 1991-1-1 is part of this consideration and was defined by the CEN members.
The CEN is an association of many countries in order, among other things, to make uniform, Europe-wide specifications / to speak a uniform language, in the case of the EN 1991 family of standards, both with regard to the action and the calculation (type and method) for determining the load-bearing capacity of components.

EN 1991-1-1 lists, among other things, vertical and horizontal impacts on structures, such as Category F for multi-storey car parks, garages, and parking platforms for vehicles with a total weight of up to 30 kN. For the horizontal loads, see Annex B in Table 6.12 of the EN 1991-1-1 standard for car parks. This Annex B has an informative status and must be declared in the National Annexes to this standard as applicable for the respective country. This applies to Austria and Great Britain.

Vertical effects are understood to mean: the dead 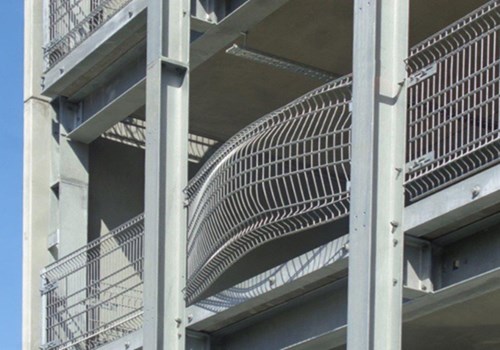 weight, loads due to use such as vehicle loads that act on the structure.

Horizontal effects describe e.g. wind loads (EN 1991-1-4), loads from a vehicle impact, and people who have to be protected from falling on a parapet.

What is unusual in parking structures in contrast to "normal" buildings are e.g. Loads occurring due to a vehicle impact => distinguishing feature.

In this article, we take a closer look at the horizontal forces caused by vehicles with vehicle impact.

How Do the Forces Act and How Can the Reaction of the Component to Them Be Determined?

Appendix B to EN 1991-1-1 contains formulas for calculating the impact load of vehicles. For example, a vehicle with a total mass of 2,500 kg and a rigid crash system with a deflection of 0 mm results in a horizontal force of 150 kN. However, this force is reduced to 25 kN for an impact protection system that allows deformations of 500 mm, for example. With a vehicle mass of 3,500 kg, the impact load increases to approx. 354 kN with a rigid system, whereas the force with a permissible deformation of the impact protection system of 500 mm is 59 kN. 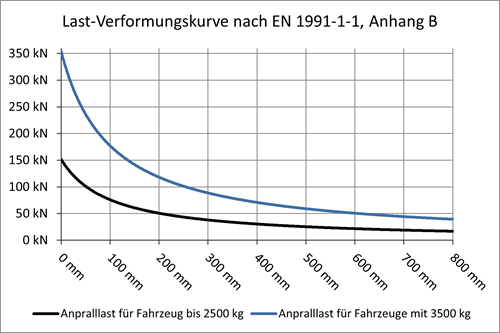 As a result, even large impact energies, such as those introduced into the impact protection system by a transporter involved in an accident, can be safely and reliably absorbed.

projekt w was founded in 1984 and is located in central Germany and specializes in safety barriers for car parks. We have set ourselves the task of integrating our products harmoniously into parking structures. The INTEGRA-pw product portfolio replaces conventional systems such as concrete parapets or guardrails and meets applicable European and US standards.