The municipality of Stein, the canton of Aargau and SBB (Swiss Federal Railways) has invested more than €5 million in the construction of a new Bike+Rail car park at Stein railway station which provides twice as many parking spaces to customers.

The car park was built as a steel construction with prefabricated concrete elements. projekt w was in charge of fitting the fall protection system and supplied more than 850 linear meters of hot-dip galvanized INTEGRA-pw 943 mesh mats, which were mounted on the steel supports using special fastenings. The fastenings feature compensation mechanisms for tolerances so that the loads occurring in the event of an impact are diverted to the onsite substructure. 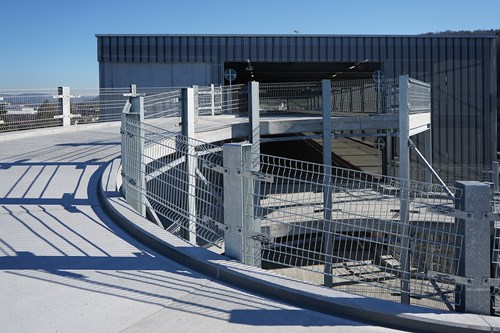 The limited space available on the construction site posed a particular challenge during the construction phase since the site was located between the railway tracks and the road, and the station continued to operate throughout the entire construction phase. Stein railway station is located on the Basel-Zurich line and is, therefore, also used by many commuters crossing the border from Germany.

projekt w was founded in 1984 and is located in central Germany and specializes in safety barriers and urban system housings. We have set ourselves the task of integrating our products harmoniously into new and existing urban housing and parking structures. The INTEGRA product portfolio replaces conventional systems such as concrete parapets or guardrails and meets applicable European and US standards.