Large cities such as San Francisco, London, and Singapore, among others, have adopted the smart city ethic with the use of digital technologies to enhance performance and wellbeing, to reduce costs and resource consumption, and to engage more effectively and actively with their citizens.

On May 13, Cartago made history by following suit and becoming the first Smart City in Costa Rica with the launch of the “Cartago Historico Digital” project.

The project has been developed jointly by the Ministry of Science, Technology and Telecommunications (Micitt) and the Municipality of Cartago with investments from US company UST Global, Public Service company Heredia (ESPH) and Spain based Sustainable Reference. It seeks to use technological advances to provide the City with access to knowledge, information, creativity and the ability to take on future challenges. 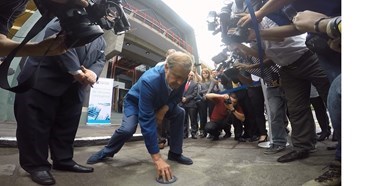 In Costa Rica it is estimated that in urban areas, more than one third of drivers spend up to three minutes looking for a parking space; that’s an unnecessary 580,000 kilometers in a year. To combat this part of the Cartago Historico Digital project will concentrate on the deployment of a huge network of on-street bay parking sensors with the first installation in Cartago which will aim to reduce traffic chaos in the central helmets.

Carlos Villaseñor, Director General for Costa Rica and Central America Sustainable Reference explained; the difference between the new system of Smart Parking’s bay sensor technology and other methods is that, for the first time, drivers are able to check parking availability in real-time and pay for parking using smartphone applications.

The launch event was attended by the head of over 70 municipalities from across the country and saw the president of UST Global and former President of Mexico, Vicente Fox in attendance who had the pleasure of installing the first SmartEye sensor into the ground and discussed the importance of Latin American countries use of innovation and technology to support projects that improve the quality of life for Costa Ricans.

He used a metaphor to explain what the audience were all jointly witnessing at the event. He described how in the state that he lives in, 6 large car companies have built huge factories. These very long buildings, can start with the production of a car at 9.43am at one end, and they know in advance that it will end, in the form of a finished car, at 7.35pm at the other end of the building. To make this happen, dozens of robots, specialized men and women, suppliers with their products, etc. have to be perfectly coordinated, as if it were some kind of magical concert conductor overseeing and directing the whole process. However, in actuality, it is thanks to modern technology that such a feat is able to take place.

The Central Canton of Cartago lays the foundations for the country's first Smart City with the Carthage Historic-Digital project. This will showcase technological progress between Local Government and public and private institutions and will act as a precedent for the rest of the country.

Vicente Fox continued by inviting audience member to imagine the same technology being used nationwide, allowing it to empower its citizens, businesses, public institutions, etc. The result would be simply incredible. This project is just the beginning of something spectacular. 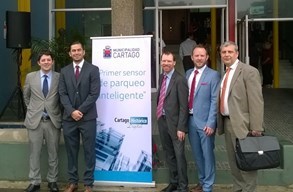 Also in attendance was Smart Parking’s EMEA Head of Technology Lewis Johnson accompanied by Javier Navacerrada and Lorenzo Palomo from our Spanish partner Viarium Technologies. Lewis and Javier and Lorenzo presented to the audience about how Smart Parking’s bay sensor technology fits into the Cartago Historico Digital project and emphasised the benefits it will bring to the city.

Lewis said “To be part of such a ground breaking project, in such a forward thinking country such as Costa Rica is a privilege. Smart Parking are proud to have our technology recognised as being able to aid in the delivery of this visionary project.

Witnessing the inaugural kick-off event with senior officials from the Costa Rican government, local government officials, multinational organisation representatives, nation media organisations, and hosts from Cartago, it was clear to see that Costa Rica truly believe that they can make a real difference to not only Costa Rica as a country, but towns and cities and most importantly the population as a whole, and having seen this day nothing is going to stop them delivering this vision.

Seeing our sensor installed by Vincent Fox (ex-President of Mexico) as the ‘symbolic’ start of the ‘Cartago Historic Digital’ project felt very special.”

Andy Bäcker, Sustainable Reference CEO rounded up the event “We couldn´t have hoped for any better launch for the project than the one just witnessed in Cartago, Costa Rica. I was truly in awe in terms of all the effort that was put into it; getting Vicente Fox, former Mexican president, to kick off the event by installing the first sensor, the ample media coverage, the various presentations by high dignitaries at the city hall with a fully packed room, etc. ...simply a wonderfully big party. And rightfully so. We just witnessed the event that is going to be trend setting throughout Latin America. Mark my words.”

Formed in 1993, Smart Parking is now one of the largest and fastest-growing car parking management companies in the UK. Smart Parking specialises in some of the most technically innovative solutions available in the market and continually leads the way in the development and application of these technologies, which they market under the 'Smart' systems brand. They develop industry-leading technology and provide their clients with the very best parking management solutions. Whether you have a large, multi-storey car park, a handful of on-street spaces, an event to marshal or are planning a major car park development, they can help find the smartest solution.